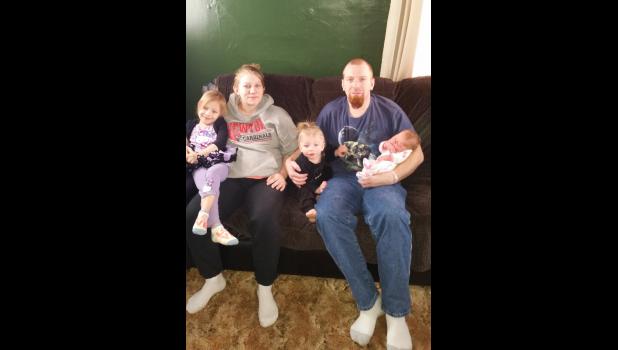 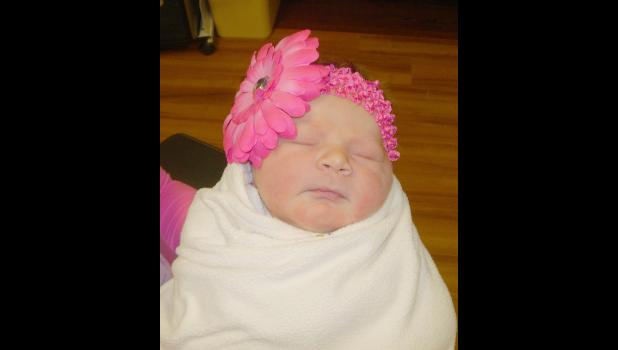 By:
Marcie Klomp ~ News Editor tpdeditor@crescotimes.com
Cresco - The First Baby of the Year for the Times Plain Dealer’s Contest may be a girl, but she’s not the first one in the family. She’s not even the second girl in the family.
Miss Nevaeh Grace Reisner joins two older sisters, Faith (five) and Sarah (two)!
She was born at 8:56 a.m. on Jan. 5, 2017 and delivered by Drs. LaBelle and Kammerer.
Although Mom, Andrea Chandler, is from Cresco originally, the family, including Dad, Clayton Reisner, live in Fredericksburg. Andrea chose Regional Health Services of Howard County to have daughter number three since her older sisters were born here, and the family didn’t want to change doctors.
Andrea said she was named Nevaeh because she thought it was a pretty name it is “heaven” spelled backwards.
The little miss came a few days before her actual due date of Jan. 9, when she was scheduled to be born by C-section. Her two sisters were also delivered by C-section.
She weighed nine lbs., four oz. “She was the biggest out of the other two. The oldest weighed eight lbs., five oz. and the younger one weighed six lbs., 15 oz. I think it was because I ate a lot of sweets,” Andrea smiled.
“I had a feeling she was going to be big.” Mom said she sat down low and up high. She was also active, which again, can be attributed to the sweets Andrea admitted.
Nevaeh is certainly one of the family already! “She looks like her two older sisters,” Mom stated. “She has Sarah’s nose, Faith’s mouth and chin and her dad’s ears!”
So how about Dad? Clayton said he is excited, but like all parents do, he is worried. “I’m stressed and worried because we have too tiny of a house!”
He won’t have to worry about a bigger house just yet. It’ll be a few months before Nevaeh really gets moving around!
For being the first baby of the year, Nevaeh and her family have received gifts from area businesses that sponsored the contest with gifts or gift certificates, including the annual baby quilt donated by the Hospital Auxiliary. Others participating included CUSB Bank, Regional Health Services, O’Henry’s Stitches & Prints, Holstrom’s Gift & Jewelry, Plantpeddler, Craft ’N Chaos, The Ox & Wren Spirits & Gifts, Sue-Z-Qs and Times Plain Dealer.