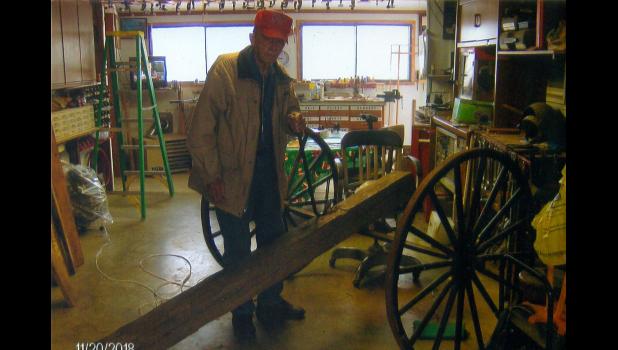 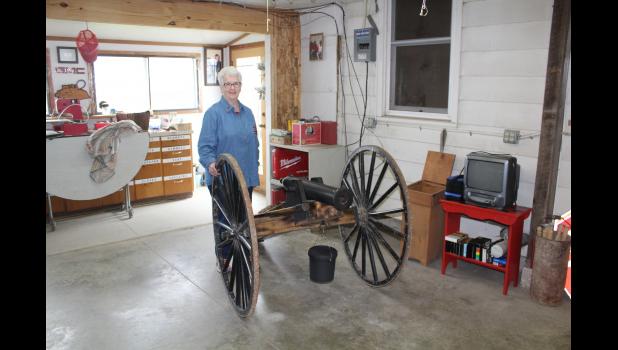 By:
Marcie Klomp ~ News Editor tpdeditor@crescotimes.com
Cresco - Although Larry Voves passed away Dec. 21, 2018, he lives on in the memories of family and friends who were lucky enough to receive some of his custom-made art pieces.
His love of tinkering and giving helped get him through the last months of his life.
Voves was given a diagnosis of terminal COPD on May 23, 2018. The doctors told him he had 6-12 months to live. At that time, he shared with his wife, Colleen, and five daughters that he wanted to build a life-size replica of a Civil War cannon before he died.
He had been making small cannons since the late 1980s, which fired. He later stopped making the firing cannons for safety sake, but he still made desk-top cannons.
Larry and Colleen went to the Cresco Public Library. They couldn’t find a diagram, but one of the gracious ladies who worked there went on the Internet and found pictures of Civil War cannons.
Without instructions and just a few pictures, the couple spent some time at the Ft. Atkinson Rendezvous Days visiting with two men who had built life-size replicas of Civil War cannons. They explained how they built and ignited them. Larry measured the two cannons to give him an idea on how he would create one.
He then purchased the wheels and axle from an  Amish gentleman. He turned to his good friend, Walt Mrachek, for getting the wood necessary for the project. Walt gladly offered wood that he had at his farm. Don Traeger, next door neighbor and faithful friend, listened and encouraged Larry to fulfill this last wish.
Dan Opat, a decades-old friend, helped Larry in realizing his project, too. He was always just a phone call away. Opat was Larry’s co-hort in this project from the inception.
Ron Fitzgerald, owner of the Steel Shop, used his expertise to form and modify a 5-inch x 30-inch pipe to be used for the cannon barrel.
After Larry passed, Opat took over to finish the project with great workmanship and pride, and Fitzgerald donated his time and effort on this project in remembrance of Larry.
The cannon was completed on Jan. 15, 2019, and was ready to be fired for the family the end of June.
Colleen said, “These men helped Larry achieve the dream he set out to do. These are great guys who showed a lot of friendship and care. There’s a lot of kindness nestled in small-town Cresco.”