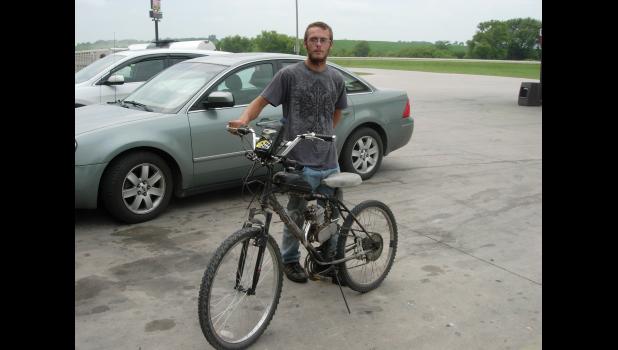 By:
Marcie Klomp News Editor tpdeditor@crescotimes.com
Lime Springs - With RAGBRAI® (Register’s Annual Great Bicycle Ride Across Iowa) a thing of the past, it might be interesting to look at a similar, but different, mode of transportation.
Michael McIntyre of rural Lime Springs has converted a 26-inch Roadmaster mountain bike into a motorbike.
“I bought it out of tax money,” McIntyre said. It took him about three days of tinkering to get the engine kit, which he purchased over the Internet, attached to the bicycle.
When he was about 12, he used to ride a normal bike eight miles a day.
“I built one when I was 14 for something fun to ride. I rode it back and forth to work for about eight months. Then I bought a moped.” His goal is to eventually purchase a motorcycle, but that doesn’t mean he is stuck on two wheels. “I do have two cars and a third one I am working on now.”
His speedster got to around 32 miles per hour until he cut the exhaust. Now it is a little slower. But McIntyre noted some fans spent $2,000-4,000 on their motorized bicycle. Those can get up to 60 mph.
The vehicle can be pedaled or started—either by pedal or kick starting it. McIntyre commented it is easier to pedal start it. Lifting up the bike to kick start it is heavy. That’s also why a person doesn’t see many, or any, on RAGBRAI® as the two-stroke motor weighs about 20 pounds.
Although fun to create and ride, they are not as popular as they could be if they could be registered. “You can’t get a VIN (Vehicle Identification Number) for a bicycle frame,”
The bicycle specialist joked, “Lots of people ask what it is!” He has a tendency to ride it into Lime Springs, where he gets a lot of attention,  from his home, about 5-6 miles in the country. The 12-mile round-trip uses up about a half-tank of gas, but he does carry an oil bottle carrying extra gas duct taped to his handlebars (a MacGyver’ed element familiar to most grease monkeys!).
Once McIntyre graduated to a four-wheel motorized vehicle, he didn’t think he’d ever ride a bicycle again, but he did ride his moped. Perhaps that just proves, once a bike enthusiast, always a bike enthusiast.