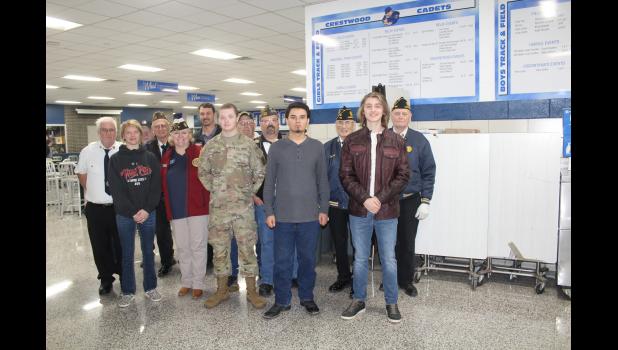 CRESCO - Legion and VFW members were honored at ceremonies held at Crestwood High School and Notre Dame Elementary on Nov. 10. In addition, they visited with fifth graders at Crestwood Elementary.
Some of the veterans took advantage of breakfast at the high school and lunch with the Notre Dame students.
At the high school, veterans posted the colors. Student Seth Lloyd, who is already serving, led the Pledge of Allegiance. Members of the high school band played several songs and the choir sang one.
Lloyd, along with Ira Keck, Elice Stinson and Isaac Soto, who are serving or plan to join the military after graduation, spoke about the sacrifices veterans and their families  have endured. In addition they explained that Veterans Day was originally called Armistice Day.
The speaker for the event was Cindy Yslas, who served for 27 years in the Air Force. She read a couple of poems and explained how veterans need to be respected for what they have given to their country.
Principal Lisa Dursky gave a $500 donation from the school. Staff donated money to be able to wear Sweats for Vets. The money will be given to a veteran over the holidays.