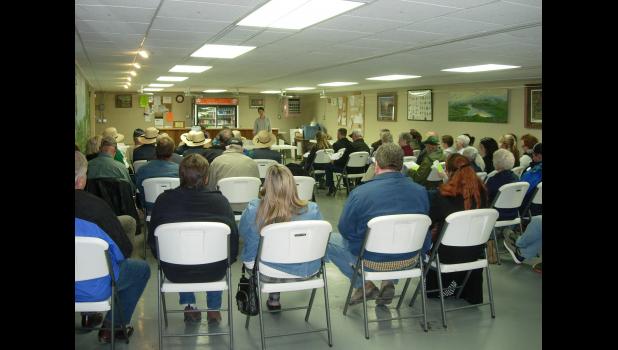 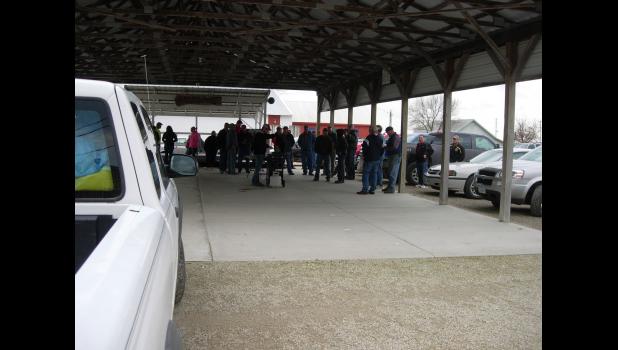 By:
Marcie Klomp News Editor tpdeditor@crescotimes.com
CRESCO - A group of community members in Albion/Forest City Township has been meeting weekly since they found out a Concentrated Animal Feeding Operation (CAFO) for Reicks View Farms of Lawler was to be constructed in their neighborhood, on property owned by Delbert Ihns. They then found out another CAFO was to be built across the road from the first by Ron and Brandon Reis.
Right away they started to fight, led by Sue and Jerry George. They got on the agenda at a Howard County Supervisors’ meeting to plead their case. Then they started a Facebook page, Northeast Iowans for Clean Air and Water.
There are nine households in a one-mile radius of the proposed confinements, with an additional eight households within 1,500 ft. of the one-mile radius.
Since then, Sue has talked with many individuals across the state and country.
She and other members of Northeast Iowans for Clean Air and Water held an informational meeting on Wednesday, April 19, at the Wildlife Building. Because the building was rented, it was private, for those against CAFOs only.
Over 100 supporters of the industry also gathered at Howard County Fairgrounds, thinking it was an open meeting.
A few from outside did make their way inside, but were asked to leave. There was a 1-2 minute argument before the seven or so individuals left. It never got out of hand.
Inside, over 60 individuals from Howard, Winneshiek, Chickasaw and Mitchell Counties explained where they were from and why they were present.
Their concerns ranged from air quality to potential health problems to quality of life to number of CAFOs in Howard County to just wanting information.
In addition, water quality was a huge issue. Neighbors of the two proposed hog facilities were concerned with losing water in their shallow wells, having water contaminated by manure spread on area fields, manure seeping into sink holes in the karst topography region and the future of Bigalk Watershed. Bigalk Creek, which runs through the watershed is a self producing trout stream.
Those present were given ideas to show their displeasure at the number of CAFOs being constructed in Northeast Iowa. Ideas included collecting petition signatures, passing out flyers, calling CAFO owners, submitting Letters to the Editor and contacting state legislators and DNR Director Chuck Gipp.
The group’s moderator was Erica Blair of Iowa Citizens for Community Improvement. She told attendees legislators could change rules and regulations regarding the Master Matrix and Manure Management Plans. She also mentioned Gipp can use the Director Discretion Rule to “condition or deny a construction permit, to modify or disapprove a manure management plan or to prohibit construction of a proposed confinement feeding operation.”
Supporting CAFOs
As with those opposed to CAFOs, supporters of the industry showed up in droves before, during and after the meeting.
Some were under the assumption the meeting was open, with both sides being heard.
Gary Sovereign, a local pork producer, said, “I never thought I’d have to defend what I do for a living. But if I have to do it to support the next generation, that’s what I’ll have to do. I’m just trying to do the best I can with the technology we’ve got.”
Sovereign added he has always liked working with pigs. “I like them better than other animals.” He’s even had pigs as pets over the years.
Gene Noem, who is in organizational development at Reicks View Farms, stated he knew of several people who had received postcards, inviting them to the inside meeting. “We thought we’d see if we could offer information as to the process on getting authorization to construct a facility.”
He noted how glad he is there are rules to follow and added the DNR bases those rules on science rather than someone’s opinion. “The DNR uses that science to help farmers understand how to build no discharge systems. It includes when we are proposing to build on a potential karst area.”
In addition, if the DNR investigates and decides a spot doesn’t fit the rules, no building will go up. “We are following their rules.”
Noem concluded by saying Reicks View Farms has over 200 employees in hog production as well as crop farming, feed manufacturing, construction, transportation, vehicle maintenance and other positions.
CAFOs, hog confinements or factory farms, whatever they may be called, are a hot topic in rural America. That’s no different in Howard County, where the debate continues to heat up.