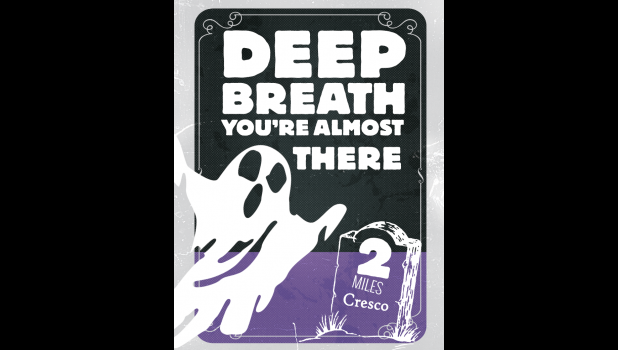 By:
Marcie Klomp News Editor tpdeditor@crescotimes.com
CRESCO - RAGBRAI® (Register’s Annual Great Bicycle Ride Across Iowa) brings people to the state of Iowa from all over the world. Some come for the riding, some for the bonding, some for vacation and some for training. But it is the overall experience that keeps them coming back and inviting friends and family to join them on the RAGBRAI® Adventure!
Many combine to form teams, with support drivers who take care of getting their gear from point A to point B. Some of the riders shared their stories.
• Yvonne McDermott and Anne Porter of Des Moines rode with Adaptive Sports Iowa Cycling Team, presented by Iowa Farm Bureau. The duo rode a side-by-side or Fun 2 Go bike. Porter said it was a “slow but sure” ride.
The group, which stayed inside the high school, had representatives from 13 states. Their clients suffer from blindness, loss of limbs due to trama or birth, stroke and head injury. Even paraplegics use hand bikes to travel.
• RAGBRAI XLV was John Wessell’s (of Bettendorf, Iowa) second ride. He and his brother and a buddy rode the whole week and stayed at the fairgrounds. One of his favorite parts of the event is the exercise. “You have RAGBRAI as a training goal. We practiced about right.” Another fun part of the week is the people. “We had our picture taken with little kids at West Bend and Ventura. I made them see how long they could say ‘Cheese!’”
He went on to say the town people are welcoming and pleasant. “Along the route, if somebody needs help or assistance there’s 10 people ready to help.”
• Jennifer Bliven of Decorah was on her sixth RAGBRAI, two all the way and four half-weeks. She was with Team Checker. “Way back when, I think it was more teachers.” The team is from Dunlap, Iowa. She found her way to it from a friend of a friend.
She said she didn’t prepare enough to ride, although it did help her to go on the Trout Run Trail and Root River Trail.
• Joe Sullivan of Texas, brother, Ruston Sullivan of Carlysle and their nephew, Dylan Sullivan of Des Moines were some of the first bicyclists to stop at Beadle Park. The brothers have ridden for 12 years and Dylan has made it up to three. “We like being up north, hoping that it’s cooler, but we had head winds all week,” said Joe. The trio was one of the privileged few who sounded the train’s horn.
• Tracie Verkler of Kingfisher, Okla. was looking forward to her trip to Dr. Norman Borlaug’s Boyhood Home. She teaches biology at OSU. “Food is super important,” she said. “He is the one who first started growing wheat. I’m excited.” RAGBRAI XLV was Verkler and her husband’s first time. He was riding, and she was the support personnel.
“I feel like a sherpa, carrying things up the mountain.”
• Bob Ferreira of Muscatine, Iowa rode his recumbent, a bicycle that allows him to lay down and pedal in front rather than beneath him. “With my legs up, there is no pressure or muscle strain on my legs.” The ride was his fourth.
• Aaron Brunell of Creston, Iowa was on his first RAGBRAI because “my dad wanted to do it, so I did it with him.”
• Team Air Force was 140 riders strong. There were retired and active servicemen. Greg Clark, Lt. Col. Ret.; Douglas Hackelton, MSgt.; and Douglas Furst, Lt. Col. Ret. were walking around Cresco around noon with their bikes. Clark said the group’s mission is to help those in need. Members stop to help fix tires or other equipment or help those in distress.
• Jim Clifton of Springfield, Ill. was on his third RAGBRAI experience (2011, 2014 and 2017). “I’m just here to ride,” he said. “We’ve had five good days of weather so far.” He added Tuesday with the overnight in Clear Lake was the shortest but toughest day because of the wind.
He was with the renowned group, Pork Belly Ventures, an all-inclusive group of around 1,500 riders.
Pork Bellies took up all of Kessel Park, which included amenities that come with a price — showers, porta potties, tent set up and take down, food and music for around $600. Prices go up from there if riders ask for a cold beverage as they arrive at camp, masseuses, laundry service and so much more.
There are even Swine Suites, where a trailer is set up with air conditioned rooms. On Thursday night, the group went through 17 kegs! McAllister Catering took care of their meals.
No matter why riders keep coming back to Iowa, the number one comment is that Iowans are friendly.