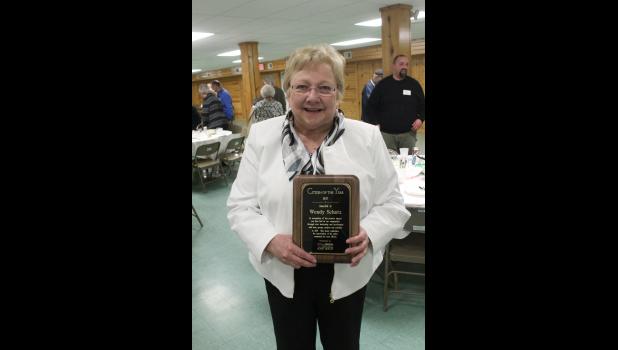 Schatz is Citizen of the Year

By:
Marcie Klomp News Editor tpdeditor@crescotimes.com
CRESCO - The Citizen of the Year award doesn’t seem to encompass the true meaning behind it. Perhaps it should be called Citizen of the Decade or even better . . . Citizen of the Half-Century. Well maybe that went a little far since that might date a lady!
Regardless, the Citizen of the Year award went to Wendy Schatz for her work in the community for the past hmm hmm years!
It might come as a surprise to some of her students, but Wendy really is her first name . . . not Mrs. or Principal, although she is both of those titles as well.
Schatz has been principal at Notre Dame Elementary School since 1999. This is her 43rd year in education, taking two years off for family and continuing education.
She has been involved with the evolution of Notre Dame since she began teaching, in 1972 as a Title I teacher. With her music background, she also worked with fourth, fifth and sixth grades.
When the school was looking for a new principal, Schatz was asked if she would like the job. After teaching for 25 years, she said, “I laughed. Then I thought maybe I could. I gave myself three years. After that time, I decided it was probably going to work.” At the end of the 2016-17 school year, she will have completed 18 years as principal and hang up her hat, as she is retiring.
Over her years at the elementary, Schatz helped with the closing of Notre Dame High School in 1989 and the growth of Notre Dame Elementary.
She was there when Assumption and St. Joseph’s Churches merged into Notre Dame. She was there when the 2010 addition was constructed. She was there when the first-grade classroom was added in 2016.
She was instrumental in raising funds for many projects — big and small. She even kissed a pig (last year when the latest classroom was opened)!
Schatz says she doesn’t feel her “job” should be considered in the Citizen of the Year award, but that isn’t completely true. Many facets of her contributions to Notre Dame Elementary are job related, but not all of them are. She doesn’t count the endless hours spent brainstorming, going to meetings, finding volunteers and praying that are involved in making the school a success.
Although she has seen enrollment go up and down — it had been in the 120s for quite a while — it has been lingering around the 200 mark for several years.
But Schatz is not just a one-trick pony as the saying goes. Besides her dedication to the school, she was involved in the Cresco Fine Arts Council for 8-10 years. “For a small town to bring in artists and crafters is amazing.”
With her love of music, she attends concerts, especially when her daughters (Mali Rushton, Katie Ferrie and Andrea Klimesh) and her 10 grandchildren are participating. When her girls were younger, she was a 4-H leader for Howard Center Stars, treasurer for Band Boosters, played organ and piano at church and was a choir director.
She also helps around town wherever she may be needed, so she has put in her time making Cresco a great place to live. She joined a Federated Club for a few years and helps at Ag Fest.
After a tornado struck her hometown of Comfrey, Minn. in 1998, she organized a drive to help give the school needed items, including Easter baskets. “I was told the 40 baskets given was enough to give to every child in kindergarten through third grade.”
Although she isn’t a member of Norman Borlaug Heritage Foundation, her husband, Alan, is, which means she’s a volunteer as well.
“I almost fell off my chair when I was called. It never occurred to me I would be considered for Citizen of the Year!” Schatz gave credit to all those who have helped her and others in the community. “You’re not doing it alone. A whole group wants to be part of it. Don’t concentrate on the nay sayers. There are a lot of good folks who are out there for the good of all. That’s what makes this a vibrant community.”
One of her teachers, Sheila Slifka, nominated Schatz. “Wendy’s contribution to our community obviously extends way before 2016. She has formed the lives of hundreds of children within Howard County. These children have grown to become highly motivated achievers within our community. Her high standards of faith, love, compassion and empathy have been passed from generation to generation.”
Just like Wendy Schatz, a person doesn’t always have to be the chairman or idea person to help with projects. Although she has certainly done that, she feels one of her best qualities is helping to build enthusiasm for a project. “I am an encourager.”