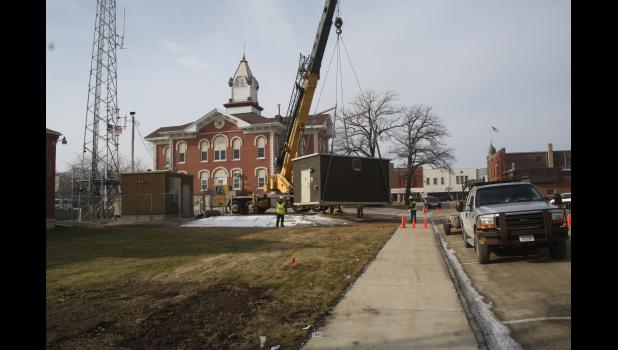 By:
Marcie Klomp News Editor tpdeditor@crescotimes.com
CRESCO - There was a flurry of activity in the first half of 2017 as information was released about the possibility of a new jail to replace the 135-year-old current structure.
On May 2, a not-to-exceed $5 million bond referendum narrowly passed with 61.35 percent (60 percent was required for passage).
Since then, architectural plans have been prepared and finalized, and plans have been sent out for bids.
Dates to remember:
• Jan. 5 - Pre-bid meeting
• Jan. 16 - Bids due in the Howard County Auditor’s office at 3:30 p.m. with bids being read in the supervisors’ office at 3:35
• Jan. 22 - Bids will be awarded at the regular supervisors’ meeting.
• Feb. 7 - Pre-construction meeting
• Between Feb. 1-15 - Inmates will be moved to Decorah jail during construction (approximately 11 months).
• Between Feb. 1-15 - Dispatch will move to the basement of the Courthouse (former engineer’s office)
• Between Feb. 1-15 - Sheriff’s office will move to offices at Community Action Building (205 2nd St. East).
• Week of March 19 - Demolition begins.
• February/March 2019 - Move into new facility
John Hansen of Midwest Construction Consultants met with members of the jail task force committee, explained a few changes to the plans and items that stayed the same at a Dec. 18 meeting.
“We were able to have a two-car sally port, 21 beds with six classifications, with two future classifications available. There is also room for work release and swing dorm facilities.”
The architect tried to salvage the current basement for storage, but because the difference in elevation is four feet from the west to courthouse side to 2nd St. East, it was not feasible. The plan was changed to an alternative bid for a partial basement.
The bids will include plans for two other alternate additions, including finishing off the work release area and finishing off the swing dorm area.
Hansen noted so far, at least 50 contractors are interested in the project with nine general contractors looking as well.
Six different contracts will be let:
• General construction
• Security metal doors, frames, hardware and equipment and security electronics
• Plumbing
• HVAC - Heating, Ventilating, Air Conditioning
• Electrical and security electronics conduit and wiring
• Fire sprinkler
Preparatory work has already begun. On Dec. 18, a refurbished electrical room 12 ft. x 21 ft. was moved into its final position. It will hold the E-911 system, while the existing building will continue to store the radio equipment. The county went with a refurbished building at a cost of $25,000-30,000 instead of a new one at $75,000-80,000.
Starting the first of the year, plans involve moving one of the dispatch desks to the courthouse. Once that is set up, dispatch will be able to move to the new location, and then the other desk will be moved, to allow demolition to begin.
The original plan had dispatch staying in place. The jail was going to be built around the area, then dispatch was to move into the new building. The present dispatch room would then be demolished and the rest of the jail built in its spot.
By moving out completely, the timeline for finishing the project went from 18 months down to tentatively 11 months.
Sheriff Mike Miner has a few ideas up his sleeve. He said staff has been talking about having a ‘spend the night in the old jail’ party. “For those staying all night, they would go before the magistrate and pay a $50 or $100 bond, with the money going toward a community service organization.” He said it could be done in the new jail as well.
“I’ve also talked to the Historical Society, to see if they want to walk through and take pieces of the old jail to display at the museum.”
The landscape at 124 South Park Place will be changing over the next year. The 135-year-old jail will be gone, and a brand new facility will take its place. Check out the progress in future editions of Times Plain Dealer.