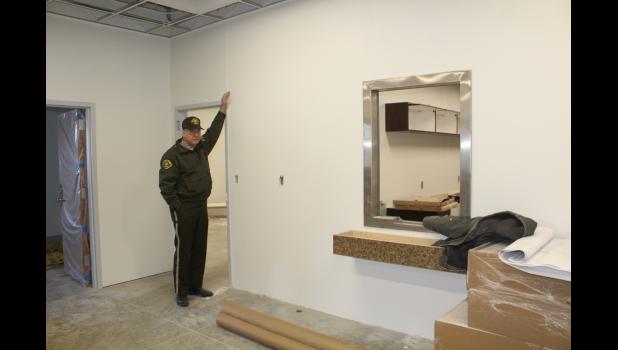 By:
Autumn Nolan ~ TPD Intern
CRESCO - “This jail was one of my goals when I took office,” Sheriff Mike Miner said in a previous update  on the jail last September.
Now, 11 years after becoming sheriff, Miner is able to fulfill the goal he made when he took office in 2009.
The recent Howard County Jail was 135 years old when it was tore down last year to make room for the new one, which should be completed by the end of April.
The new jail is about triple the size of the old one. From the outside of the Howard County Jail, it looks a little small but once inside the size is remarkable.
When visitors go in the entrance, there will be plaques on one of the walls, and on the floor there will be engraved symbols. There is an office for a probation officer who will be there once a week.
Visitors are now  able to video-chat with inmates instead of meeting them in person and this interaction will take place in a small secluded room near the front door of the jail, while the inmate communicates from the cell.
The sheriff and deputies now have more comfortable offices than before, with much more space. The sherriff has a big office with beautiful windows overseeing the courthouse and street. The deputies have two sets of offices.
An updated feature of the new jail is a locker room for the officers. They can change into a fresh uniform or street clothing and can even take a shower if they feel grimy and sweaty. This had not been an option for them at the old jail.
Next to the locker room is the armory, which holds the weapons.
Down the hall a bit, you can find the new  evidence room. Some evidence from the previous jail will be transferred to the new. The old and new evidence will not  be stored in normal file cabinets. They will now be stored in moveable shelves that will butt up against each other, making everything much easier to organize and keep track of.
The basement is another storage area. It also contains part of one of the old jail cells to preserve that history.
Like every jail the most important place is the cells where inmates are held. There is a total of 10 cells in the new jail. Two of the cells have been  accommodated for special purposes. There is a cell that will be completely padded. Inmates who are causing trouble or are a danger to the other inmates or themselves will be placed in the  cell.
To learn more about the new jail, locals can look forward to an open house that will be held before inmates are returned to Howard County. They have been held in Winneshiek County Jail during the construction.