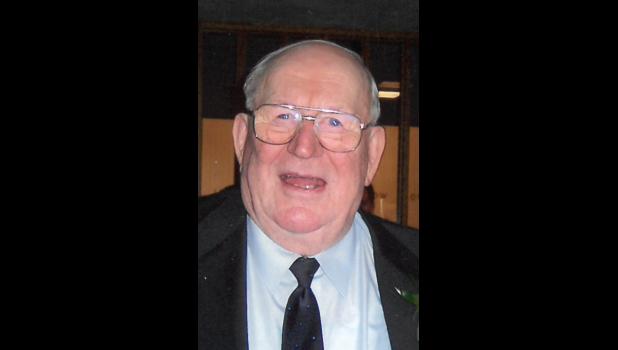 April 15, 1921 —
Nov. 8, 2017
Lime Springs - Allen Tesmer, age 96, of Lime Springs, Iowa died on Nov. 8, 2017, at Evans Memorial Home in Cresco, Iowa.
Funeral services will be held at 11 a.m. Monday, Nov. 13, 2017, at Lime Springs United Methodist Church with Pastor Paula Hemann officiating. Visitation will be held from 3-6 p.m. Sunday, Nov. 12, at Lime Springs United Methodist Church. Visitation will continue an hour prior to the time of service Monday at the church. Hindt-Hudek Funeral Home of Cresco is assisting the family. Allen Tesmer was born April 15, 1921 in Millville, Minn. to Ernest and Louisa (Krueger) Tesmer. He was the sixth of 12 children. He spent eight years attending a one-room country school, near the home farm. Allen attended two years of high school in Millville. He helped on the family farm, along with working for area farmers until entering the service. On Sept. 1, 1942, he entered active duty at Fort Snelling, Minn., from where he left for Fort Lawton, Wash. He learned close order drill and was then transferred to Midland Canadian Camp near Prince Rupert, British Columbia for basic training. Four months was spent with the 228th Military Police Company. The next two years were spent as a wrecker driver and the remainder of his time in the service was spent as a messenger courier between Prince Rupert, B.C. and Port Edward, B.C. When World War II ended, Allen was home on recuperation leave. He spent the next two months in striking force in Aberdeen, Md. He was discharged at Fort George Mead, Md. on Oct. 26, 1945.
In April 1946, Allen purchased a truck, hauled cream for the Lake City Creamery and then moved to Rochester, Minn., where he, along with his brother, Larry, hauled milk for Rochester Dairy.
On Feb. 14, 1949, Allen was united in marriage to Arlene McNee. In August 1950 they purchased a farm in Fillmore County, Minn., where they had a dairy farm. When arthritis was too much for Allen, he sold the dairy herd and built a large hog operation, which he ran for many years. He attended four years of Agriculture School in Spring Valley, Minn. He was baptized and confirmed at Saetersdal Lutheran Church in 1954. Arlene passed away on March 7, 1984.
On Oct. 11, 1986, Allen was united in marriage to Deloris Dawson at the Little Brown Church in Nashua, Iowa. They loved spending the winter months in the south and southwest. Allen drove in all 50 states. He was delighted to be able to reach the mountain tops and explore each mountain range he could get to. He also enjoyed the Gulf Coast and walking along any nearby beach.
Allen enjoyed watching nature and the crops growing to be harvested in the fall. He loved taking the car out for a drive and going out to eat.
Allen is survived by his wife, Deloris; children, James Tesmer of Rochester, Joy (Robert) Baker of Minnetonka, Minn. and Gene (Diane) Tesmer of Knob Noster, Mo.; daughter-in-law, Kathy Tesmer of Harmony, Minn.; stepchildren, Paulette Smith of New Braunfels, Texas, Samuel (Pat) Carter of Cadiz, Ky. and Brad (Judy) Carter of Hopkinsville, Ky.; 12 grandchildren, Jeremy, Michael, Wendy, Jennifer, Mark, Karin, Sarah, Gordon, Danielle, Chelsea, Kim and Adam; two step-grandchildren, Shanna and Jamie; 14 great-grandchildren, Olivia, Gavin, Izayah, Brackston, Morgan, Kathryn, Cooper, Harper, Lucas, Logan, Evelyn, Chris, Sydney and Alex; four step-great-grandchildren, Nolen, Blair, Camilla and Carter; three brothers, Lawrence Tesmer of Elgin, Minn., Edward (Lorraine) Tesmer of Millville and Louis (DeLoris) Tesmer: a sister, Wanda Otteson of Red Wing, Minn.; and many nieces and nephews.
He was preceded in death by his wife, Arlene; his parents; a daughter, Julie Tesmer (1954); a son, Jerrold (2015); a grandson; seven siblings, Alfred, Carl (Joyce), Walter (Renata), George (Caroline), Ernest (Margorie), Russell (Rita) and Hazel; and brother-in-law, Richard Otteson.