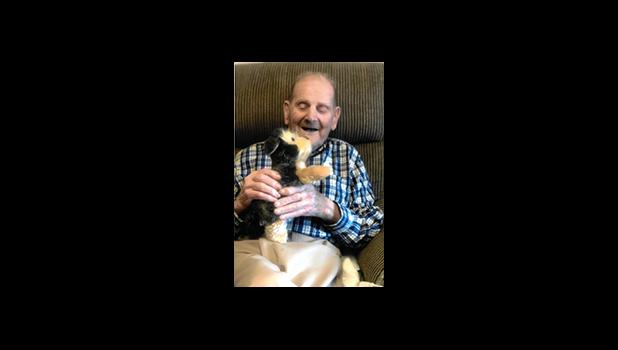 May 9, 1925 —
Oct. 27, 2019
CRESCO - Carl “Jim” Melver Jr. passed away on Oct. 27, 2019 at Accura HealthCare of Cresco, Iowa.
A visitation will be held on Thursday, Oct. 31, 2019 at 10 a.m. at Immanuel Lutheran Church of Cresco. Funeral services were held on OCt. 31, 2019 at Immanuel Lutheran. Burial was in New Oregon Cemetery in Cresco.
Hindt-Hudek Funeral Home is assisting the family.
Carl was born on May 9, 1925 in Bonair on the family farm to Carl and Eva (Henderson) Melver. He was one of 15 siblings, three sisters and 11 brothers. He and his brothers all worked at young ages to help support their family. He was a very hard worker. He remembered a nice farmer for whom he worked for giving him his first car. He worked for various farmers in Howard County and also roofed houses for many years. He was in the roofing and painting business with his son in the mid-to-late 1980s.
After Jim retired, he mowed lawns and shoveled snow. He also enjoyed babysitting his grandchildren when they lived in Lime Springs.
Jim met his wife-to-be, Carol, one day when he went to help fix her car with his brothers. They later married on Aug. 8, 1953. Together they raised two children, son, Jim, and daughter, Ruth.
On Sundays, Jim always enjoyed taking his family to visit his parents and Carol’s family, too. His family was always very important and the reason for his hard work, which made it difficult when they lost their children in their young adult years. With the help of many good friends and family, as well as the faith of their church, Jim was able to stay strong and keep going.
Jim said, “I’ve seen my share of hard times, but I have been blessed with many great friends and family. I am grateful to have my loving wife by my side after 67 years of anniversaries together!”
Jim is survived by his wife, Carol; daughter-in-law, Jody Melver; granddaughters, Amie (Mose) Yoder and Holly (James) Bass; grandson, Samuel (Anh) Melver; great-granddaughters, Carol Elsner and Allie Luan Melver; great-great-granddaughter, Caladaugh Rankin; great-nephew, Eric Borseth; and brothers, Leonard “Doc” and Oscar “Butch” (Pat) Balk.
He was preceded in death by his parents; children, Jim and Ruth; brothers, Robert “Bob” (Grace), Kermit (Mary), Earl, George “Bill” (Frances), Norman (Eileen), Richard “Dick” (Sheryl), Tom, Edward and Edwin; and sisters, Grace (Al) Schorr, Ann (Bob) Balk and Wanda (Billy) Lawsen.