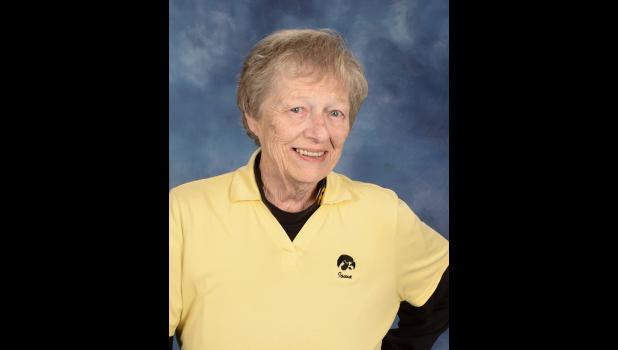 Nov. 26, 1939 —
Feb. 10, 2020
CRESCO - Darlene Emily (French) Hellman, age 80 of Cresco, Iowa, was kindly admitted in the heavenly kingdom after a prolonged battle with lung disease on Feb. 10.
A Mass of Christian Burial will take place at Notre Dame Parish on Saturday, Feb. 15, 2020 at 11 a.m. in Cresco. Friends may call from 5-7 p.m. on Friday, Feb. 14, 2020 at Lindstrom Funeral Home in Cresco. Burial will take place in spring at Mount Olivet Cemetery in Waterloo, Iowa.
Darlene was born to Martha French on Nov. 26, 1939. She was a 1957 graduate of St. Mary’s High School in Waterloo and graduated from the Allen Hospital lab technology program in 1958. She married the love of her life, Richard (Dick) Hellman on Sept. 9, 1961 at St. Mary’s Catholic Church in Waterloo. They had a happy marriage until Dick passed away on Oct. 13, 2010. She has been a resident of Cresco since 1970.
Darlene was a die-hard Hawkeyes fan. The couple had season football tickets to see their team for over 50 years. She shared that spirit with her entire family. Darlene’s football love did not stop with the Hawkeyes. She would watch football games all day if she could.
She was an avid card player, was in several (100) bridge clubs over the years and played cards with her friends and family as often as she could.
Darlene is survived by her four daughters, Dr. Deb (David) Oldham of Anamosa, Iowa, Diana (Armando) Carter of Rochester, Minn., Donna (Terry) Hovey of Mazzepa, Minn. and Darla (Curtis) Iburg of Oxford, Iowa; 10 beloved grandchildren, Em Oldham, Abigail Oldham, Alexandria Oldham, Jaden Oldham, Noah Carter, Dallas Carter, Emma Carter, Casey Hovey, Cole Iburg and Wyatt Iburg; her brother, Bobby (Val) French; her sisters, Martha May McBeth and Rosalie (Dick) Humpal; and many nieces and nephews; as well as her close friends, Barb Prochaska, Mick and Jolene Gamez, Chuck Pierce and Patrick Darling.
Darlene was preceded in death by her husband, Dick Hellman; her mother, Martha French; her in-laws, Victor and Marie Hellman; her brother, Donald French; and her sisters, Mary Rogers and Rose French.