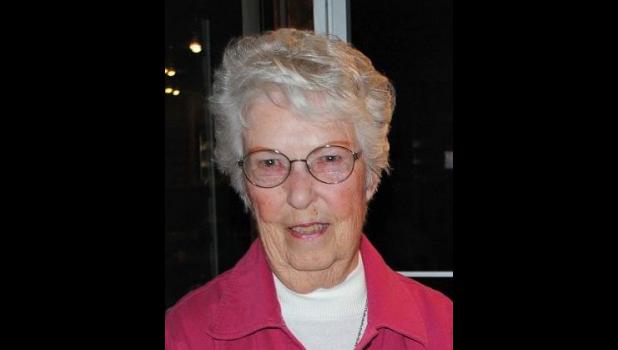 Feb. 6, 1924
May 14, 2017
CRESCO -  Dortha “Dot” Preston, age 93, of Cresco, Iowa passed into eternal rest on May 14, 2017.
Funeral services will be held on Wednesday, May 17, 2017 at United Methodist Church in Cresco, at 11 a.m. Friends may call from 5-7 p.m. on Tuesday May 16 at Lindstrom Funeral Home in Cresco, as well as one hour prior to services at the church. Burial will be in the Oak Lawn Cemetery, Cresco.
Dot was born in Modesto, Calif. on Feb. 6, 1924 to William and Ella Yarberry. Shortly after, they moved to Arkansas. She met Jack Preston in 1943, when he was stationed at Fort Chaffee, Ark., and they married May 20, 1944. She worked at a glider plant while Jack went overseas with the Army. They moved to Cresco in 1946 after he returned.
Dot enjoyed being a stay-at-home mom while her girls were growing up, keeping busy as Blue Bird leader and doing lots of sewing, baking and crafts. She was also an active member of the United Methodist Church and the ladies’ circle.
While Jack worked at the post office and home printing business, she ran “Dortha’s Wedding Services” out of the home and helped many brides plan their special day. As the girls got older, she worked for a few years at the Times Plain Dealer.
Dot enjoyed bowling, painting crafts, counted cross stitching, sewing, reading and golfing, winning the ladies’ club championship a few times. She loved jigsaw puzzles and playing cards, dice and dominoes with her daughters and grandkids. She also considered an occasional visit to a casino a fun outing.
Dot and Jack enjoyed their bridge club and square dancing friends. They traveled after retirement to the west coast, Florida, Bella Vista, Ark., Padre Island and settled in Mesa, Ariz. as ‘snowbirds’ for 13 years. Together they worked the newspaper crossword puzzle and Jumble every day! They are the ones who started “Snoopy Lane” at Christmas in Cresco. After many years of cheering on her Cubs, it was a thrill for her to watch them win the World Series!
Dot is survived by her daughters, Debbie (Kenny) Moellers of Cresco and Sandie (Gordy) Smith of Cedar Rapids, Iowa; and grandchildren, Korey (Peggy) Moellers of Shawnee, Kan., Jeremy (Kelly) Moellers of Cresco, Ryan (Meagan) Moellers of Cresco, Katie Smith of Coralville, Iowa and Sara-Ann Smith of Santa Monica, Calif. She was also blessed with nine great-grandchildren, Masen Neu-bauer, Katelyn Moellers, Jack Moellers, Cameran Moellers, Addison Moellers, Kenzie Moellers, Bryce Moellers, Dayne Moellers and Harkan Moellers; and a sister-in-law, Sally Yarberry.
She was preceded in death by her parents; husband, Jack; grandson, Nathan Moellers; and her two brothers, Randle Yarberry and James (Francis) Yarberry of Arkansas.