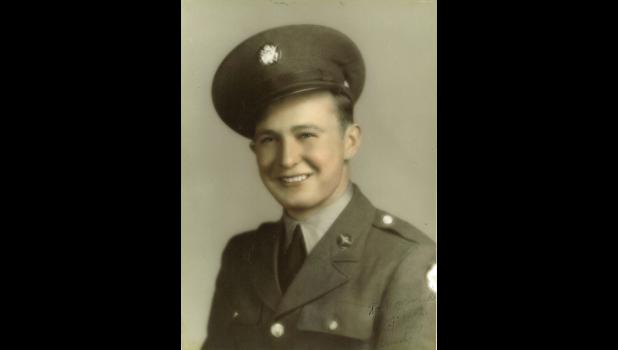 May 29, 1915 —
Aug. 20, 2017
Hesper, Iowa -  Ernest (Ernie) Merton Corson, age 102, of Hesper, Iowa passed away in his sleep on Aug. 20, 2017 with his family by his side at Aase Haugen Senior Services in Decorah, Iowa.
Visitation will take place at the Mengis Funeral Home in Mabel, Minn. on Thursday, Aug. 31 from 4-7 p.m. and one hour prior to the service at Hesper Lutheran Church in Hesper, on Friday, Sept. 1 at 11 a.m., with Pastor Matt Larson officiating. A reception will follow.
Interment is at Hesper Lutheran Cemetery in Hesper immediately following services.
Ernie was born on the Young family farm outside of Hesper on May 29, 1915 to Elmer Melvin and Emma (Young) Corson. His family lived in Hesper on the Skunk Farm and resided in Prosper, Spring Grove and Mabel, Minn. He spent many summers on the family farm in Hesper Township.
Ernie graduated from Mabel High School in 1935 and attended Minnesota Normal school – the only boy in his class — in Preston. He also attended Winona Teacher’s College. He taught for six years, first through eighth grade at the South Fork, Pigtail and Diamondback rural schools in Fillmore County, Minn.
Ernie enlisted in the Army Air Corps in 1941. He was deemed too old to fly planes at age 26, so he entered radio school and graduated two days before the bombing of Pearl Harbor. He served with the Army Airways Communication Services (AACS) during WWII at locations throughout Alaska and the Aleutian Islands, including volunteering for the invasion of Attu. He was diverted to the nearby Island of Shemya and participated in the building of a top-secret Air Force base during extreme arctic conditions. The soldiers lived in very primitive conditions, with most living in only tents to protect them from windy and volatile weather. Because he oversaw the radio equipment, Ernie was given the first Quonset hut on the island.
This base, located at the end of the Aleutian Island chain, was used to bomb the northern islands of Japan and to protect the western United States from another Japanese attack. The base was kept secret throughout the war. Ernie was selected to be a part of the invasion of Japan, but thankfully never had to report for that mission, as Japan surrendered.
After World War II, Ernie and his brother, Norman, opened a radio repair shop in Mabel. He also installed the first electrical wiring for his uncle Jones and aunt Charlotte on the Young family farm, before reenlisting in the Air Force.
He married the love of his life, Charlotte Cleone Clink, Nov. 7, 1946 in Great Falls, Mont. Two deployments to England soon followed, where they spent six years, plus postings at many locations in the U.S. He was awarded the Air Force Commendation Medal.
Ernie retired in 1963 after over 20 years of service in the United States Air Force. He and Charlotte bought the family farm in Hesper Township, where they raised their six children and enjoyed gardening, just as his folks had when he was a child.
Ernie took the position of manager for the Mabel Cooperative Telephone Company (Mabel Co-op). He used the skills he had acquired as part of AACS and converted the above-ground party line telephone service to underground single party service, which made Mabel Co-op the most modern telephone company in the area at that time.
Ernie continued to help on the family farm until the age of 93. He and Charlotte were faithful members of Hesper Lutheran Church. He was a long-time Boy Scout leader and active supporter of the North Winneshiek School. He also played dartball for many years!
The couple spent their golden years sharing their love and Norwegian/Scottish heritage with their precious grandchildren and great-grandchildren. Ernie and Charlotte had 66 glorious years together, before her death in December 2012.
He was a life-time member of the American Legion Post #299 and the Veterans of Foreign Wars in Mabel. He participated in the Eastern Iowa Honor Flight to Washington, D.C. in April 2013.
Ernest is survived by his sister-in-law, Donna Clink of Ames, Iowa; brother-in-law, Sterling (Jhan) Clink of Story City, Iowa; daughter-in-law, Margaret Corson of Cedar Falls, Iowa; daughters, Lynda Metzler of Richland, Mo. and Charlene Selbee of Decorah; sons, Doug Corson of Hesper, Dalton Corson of Ames and Forrest (Barbara) Corson of Des Moines, Iowa; grandchildren, Carolyn (Vance), Marisa (Matt), Jeffrey (Louisa), Christopher (Nadja), Timothy (Jen), Anthony, Vickie (Jon), Michael, Aerial (Jason), Elizabeth (Manuel), Lena (Teague), Rikki and Cristine (Robert); great-grandchildren, Elena, Alyssa, Sophie, Margaret (Maggie), Hayden, Harper, Charley, Zahra, Dylan, Madison, Tyler, Anna, Jayson, Bradyn, Connor, Jordan, Max, Jordin, Christian, Damien, Toby, Trevor, Aidan and Keanu; great-great-grandson, Adryann; and many nieces, nephews and cousins, as well as countless friendships fostered during his lifetime.
He was preceded in death by his wife, Charlotte; parents, Melvin and Emma Corson; brothers, Norman and Manford Corson; sisters-in-law, Millie Corson, Anita Corson and Eleanor Kacher; brothers-in-law, Clarence A. Clink Jr. and Stanley Kacher; son, Dennis Merton Corson; and son-in-law, David Metzler.
The family suggest memorials to Hesper Lutheran Church, Hesper Lutheran Cemetery or Aase Haugen Senior Services in Ernie’s memory.
Mengis Funeral Home, Mabel, is assisting the family.