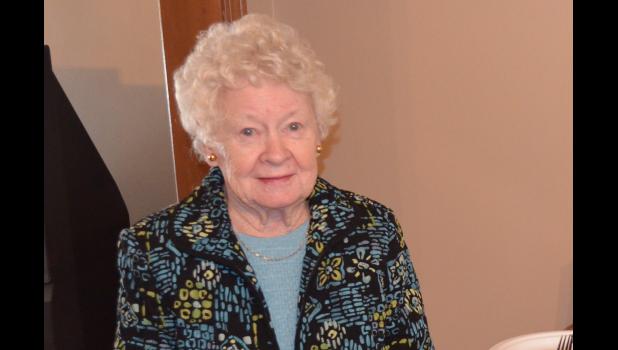 Aug. 28, 1923 —
Nov. 14, 2017
Maquoketa - Frances Dale Elwood Melvold, age 94, of Maquoketa, Iowa died Monday afternoon, Nov. 27, 2017 at Clover Ridge Place in Maquoketa from complications of dementia.
Her body was donated to science at the University of Iowa Carver School of Medicine in Iowa City.
A memorial service will be held at 11 a.m. Thursday, Jan. 11, 2018 at the Maquoketa United Church of Christ with Rev. Stephanie Haskins officiating. Visitation will be held from 5-7 p.m., Wednesday, Jan. 10, at Carson Celebration of Life Center in Maquoketa and from 9:30 a.m. to service time on Jan. 11 at the church.
Frances was born Aug. 28, 1923 in Elma, Iowa, the first of four children born to Francis Dale and Marian Lucretia George Elwood. She grew up in Cresco, Iowa and graduated from Cresco High School. She attended the University of Iowa and taught school in Norway, Iowa for about two years during World War II.
On Feb. 19, 1944 she married Navy Lt. Cmdr. Robert Thomson Melvold of Cresco in the chapel of the U.S. Naval Base in New Orleans, La., where he was stationed at the time, during World War II.
After his discharge from active duty following the end of World War II, the couple embarked on their dream of owning and operating a community newspaper and searched for one to acquire. They came to Maquoketa and on May 1, 1946 purchased the weekly Maquoketa Community Press. Thus began a partnership in the community newspaper and commercial printing businesses that continued for nearly 60 years, until her husband’s death in 2005.
On Jan. 1, 1952 they purchased the rival Jackson Sentinel and merged the two newspapers into twin weeklies and later, into a semiweekly. They acquired the DeWitt Observer in 1954, the Galena, Ill. Gazette in 1961 and the Bellevue Herald-Leader in 1972. Together with their partner in DeWitt, Robert Parrott, they founded the North Scott Press in 1968. They were active members of the Iowa Newspaper Association and were Heritage Club members of the Iowa Newspaper Foundation.
They also spun off the commercial printing activity of the Maquoketa newspapers in the 1950s and formed a separate company, Eastern Iowa Printing Co., later reorganized in 1973 as Tri-State Graphics. Frances was involved in the management of that business, which at one time had sales offices in all of the affiliated newspapers and operated quick-print shops in Dubuque and Cedar Rapids. She and her husband also owned a printing business, Englewood Print Center, for several years in Englewood, Fla.
Frances was active in the Maquoketa United Church of Christ, serving as Sunday school superintendent for many years and holding state-level positions in the church. She served on the Iowa Vocational Education Advisory Board, including a year as chair, as an appointee of Gov. Robert Ray.
She worked to provide services to people with disabilities and was instrumental in the founding of Area Residential Care in Dubuque and of the Jackson County Developmental Activity Center, later known as DAC Inc. and now Imagine the Possibilities, which serves individuals with disabilities.
Frances  also was instrumental in the formation of the Jackson County Volunteers Organization, which provided volunteer help to many organizations and projects. She was instrumental in starting the annual Thanksgiving Day community dinner. She was a 60-year-plus member and past president of Chapter BX of PEO Sisterhood in Maquoketa.
She held strong views on political issues and social causes. She actively supported causes for world peace, social justice, disarmament and conservation. She joined marches in Chicago during the civil rights movement and was an outspoken opponent of the Vietnam War.
Frances  was an advocate of conservation of natural resources. She and her husband completed the Master Conservationist course through Iowa State University Extension. She was an active member of the Democratic Party.
She enjoyed reading and playing bridge and took up golf with her husband in their later years.
She enjoyed spending winters with her husband and friends at Boca Grande, Fla., where they owned a condominium for nearly 30 years. She also enjoyed family houseboat trips on the Mississippi River and summer family vacations at resorts on lakes in northwest Wisconsin. She and her husband took several trips abroad in their later years. Most of all, she enjoyed family gatherings for any occasion.
She resided in her home until April 2017, when she moved to Clover Ridge Place.
Survivors include three sons, Douglas (Mary) and John (Mary McAllister), both of Maquoketa, and Robert “R.B.” (Beth) of Park Falls, Wis.; three daughters, Miriam (Mrs. William) Brown of Iowa City, Iowa, Dr. Janis (Mrs. David Pesetsky) Melvold of Lexington, Mass. and Annette Sohl of Maquoketa; six grandsons, Tim (Hillary) Melvold of Peosta, Tyler Sohl of Portland, Ore., Noah Brown of Brookline, Mass., Benjamin Pesetsky of Somerville, Mass., Jonathan Pesetsky of Amsterdam, Netherlands and Jacob Melvold of Orlando, Fla.; two granddaughters, Emily (Mrs. Levi) McClimon of Waverly, Iowa and Rachel (Mrs. Eric) Manson of Maquoketa; one great-grandson, Landon Melvold of Peosta, Iowa; two great-granddaughters, Valerie and Tessa McClimon of Waverly, Iowa; one brother, Henry (Carol) Elwood of Cresco; and many nieces and nephews.
She was preceded in death by her parents; her husband of 61 years on Oct. 28, 2005; one sister, Mildred Butler; and one brother, George Elwood.
Memorials may be given to the Maquoketa United Church of Christ, the Jackson County Conservation Board or the Community Foundation of Jackson County.
Online Condolences may be left at www.carsonandson.com.