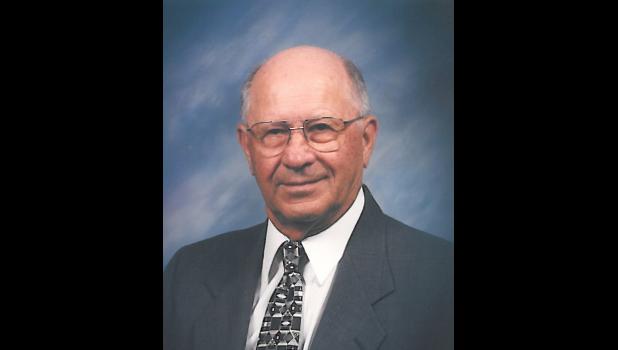 Nov. 24, 1919
May 23, 2017
CRESCO -  Fredolin R. “Lynn” Schwade, age 97, of Cresco, Iowa, died on May 23, 2017, surrounded by his loving family at Winneshiek Medical Center in Decorah, Iowa.
The Mass of Christian Burial was held on May 26, 2017 at Notre Dame Parish in Cresco. Father Dennis Cain of Notre Dame Parish officiated. Burial followed at Calvary Cemetery in Cresco.
Fredolin “Lynn” Schwade was born Nov. 24, 1919, the son of William and Ludmilla (Taylor) Schwade, near Fort Atkinson, Iowa.
At the age of 22, Lynn was drafted into the United States Army on Jan. 31, 1942, at the beginning of World War II. For three years he served as Military Police. Then he was transferred to combat duty, during which he was stationed in France and Germany and fought in the Battle of the Bulge. While in service, Lynn received seven medals. He was honorably discharged December 1945.
After the service, Lynn worked for Winneshiek County Road Maintenance for two years before beginning to farm in 1948. On April 27, 1949, he married Dolores Barloon at Assumption Catholic Church in Little Turkey, Iowa. Together they rented a farm near Fort Atkinson for seven years before buying their farm near Ridgeway, Iowa.
Lynn was a proud 70-year member of the American Legion and a member of the VFW. He was a member of St. Wenceslaus Church in Spillville, Iowa, when he was younger and most recently a member of Notre Dame Parish. Throughout his life he served on many agricultural and community boards.
Lynn had a great sense of humor, liked polka music, playing cards and going for rides to look at the growing crops. He loved his children and grandchildren and the families they were raising. Above all things in his life, Lynn was dedicated to his wife of 68 years, Dolores. They were a prime example of what love and devotion should be.
Lynn is survived by his wife, Dolores of Cresco; son, Richard “Dick” (Julie) of Spring Valley, Minn. and their children, Robin (George) Osterhus and Rhonda Johnson and stepchildren Jay (special friend Vicki) Ruud, Jamie (Ray) Niewoehner and Jarett (Kari) Ruud; son, Dale (Jeanine) of Lime Springs, Iowa and their children, Marcia (Justin) DeVore and Dean (Libby) Schwade; son, Robert “Bob” (Linda) of Lime Springs; great-grandchildren, Nick, Preston and Shay Osterhus, Skylar, Alexis and Tavja Johnson, Hannah and Jonah DeVore and Brooke, Kate and Meg Schwade; his brother, Ermin Schwade; sisters, Mildred Riehle, Doris (Leonard) Macal and Rita Kuehner; and sister-in-law, Alice Barloon.
He was preceded in death by his parents, William and Ludmilla; mother and father-in-law, Frank and Anna Barloon; his sister, Lauretta (Paul) Barta; brother, Eugene (Joan) Schwade; sisters-in-law, Mary Schwade and Helen (Herb) Wenthold; and brothers-in-law, Raymond Riehle, Leonard Kuehner, Edward (Mary) Barloon, Arnold Barloon and Joe Barloon.
Online condolences may be left at www.hindthudekfuneralhome.com.