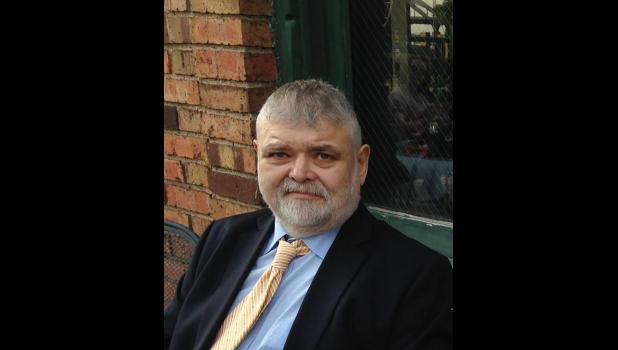 Feb. 8, 1955 —
June 9, 2019
POCAHONTAS - Gary Charles “Fuzz” Vrba, age 64, passed away on Sunday, June 9, 2019, at his home in Pocahontas, Iowa.
A funeral service was held on June 13, 2019 at Resurrection of Our Lord Catholic Church in Pocahontas. Later, a graveside service was held at Holy Trinity Cemetery in Protivin, Iowa.
Memorials can be directed to Pocahontas Hometown Pride, P.O. Box 69, Pocahontas, IA 50574.
Gary was born on Feb. 8, 1955, in Cresco, Iowa, to Alton and Dorothy (Fisher) Vrba. He grew up on a farm outside of Protivin. He began his education in a rural township school, then attended Catholic school in Protivin before matriculating to Crestwood High School in Cresco, where he graduated in 1973.
From there, Gary attended Iowa State University, where he made many lifelong friends as a member of the Phi Gamma Delta “Fiji” fraternity and also managed to earn bachelor degrees in agriculture (1978) and ag education (1979).
While at Iowa State, he met Brenda Lee Main. They were united in marriage on June 28, 1980, at Trinity Lutheran Church in Ellsworth, Iowa. To the union, three children were born, Christopher Robin, Karie Lynn and Jessica Lee.
In 1979, Gary began his teaching career at his alma mater in Cresco, Crestwood, as one of three ag education instructors and FFA advisors. In 1987, Gary accepted a similar position shared between the Rolfe and Pocahontas-area schools. There he took an active role shaping the course of the school’s ag ed program, which embraced and engaged students, regardless of their level of interest in ag. As advisor, Gary wrote a successful grant application that provided necessary funding to construct the school’s greenhouse. In 1987, he was named Outstanding Conservation Teacher in Iowa by the Iowa Conservation Education Council. He retired from PAC schools in 2009. He took pride in helping guide a generation of students, keeping his fellow faculty members and administrators on their toes and virtuosic performances of his signature “Vrba Shuffle.”
Beyond the school doors, Gary continued to cultivate a commitment to community service. He served as Cubmaster and as a den leader for the local Cub Scouts, coached youth baseball, was an Iowa Master Gardener, and along with his FFA students, assisted with too many community events and programs to count. Most recently, when able, he assisted Pocahontas Hometown Pride, Pocahontas County Historical Society and the Pocahontas County Soil and Water Conservation District.
Gary had many great passions. Cheering for the Cyclones and against the “Fawks” and “Fuskers” were high among them. Rare was a fall where Gary and his family did not spend a few Saturdays at Jack Trice Stadium. He was also an avid Minnesota Twins fan, attending many games in the old Met and Metrodome, as well as the Atlanta Braves and the Chicago Bears, a team he never saw lose in person. Guess they should’ve flown him in for the big ones!
Gary enjoyed fishing, planting and harvesting the garden (though not so much the weeding) and a good steak dinner or buffet. He had a penchant for telling the right joke in the wrong room and was an endless font of humor, a trait that could be equally endearing and embarrassing.
Later in life, he would gather with others at Dyno’s, where they’d cuss and discuss the world’s problems. Whatever shall we do without that wisdom? Gary, however, found his greatest joy in his grandchildren, Frederick, Jonathan and Lucy; he was greatly looking forward to meeting Caroline this summer.
Gary is survived by his wife, Brenda of Pocahontas; children, Christopher of Sheridan, Wy., Karie (Michael) Vokes of Urbandale, Iowa and Jessica (Stephen) Rashid of Bettendorf, Iowa; grandchildren, Frederick and Lucy Rashid and Jonathan Vokes; his mother, Dorothy Vrba of Protivin; and sisters, Shari (Vincent) Phillips of Des Moines, Iowa and Terri (Jon) Bylander of Mukilteo, Wash.
He was preceded in death by his father, Alton Vrba.