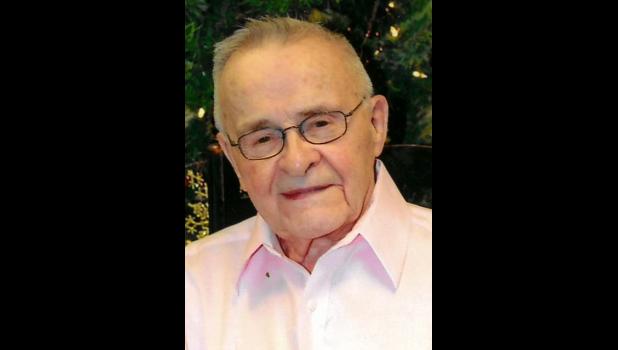 Sept. 7, 1927 —
Sept. 18, 2017
Formerly CRESCO - George D. Elwood, 90, of DeWitt, Iowa, died Monday evening, Sept. 18, 2017 at Genesis Medical Center-DeWitt.
Arrangements are in the care of Schultz Funeral Home-DeWitt.Condolences may be expressed at www.schultzfuneralhomes.com.
George Dawes Elwood was born Sept. 7, 1927, in Cresco, Iowa to Dale and Marion Elwood. He graduated from Cresco High School and attended Upper Iowa University.
George served in the 4th Army 73rd Battalion during the Korean Era, from 1950-52 and was stationed in Germany. He married Phyllis Clark Miller Jan. 4, 1958, in DeWitt. He was a former partner of the DeWitt Observer newspaper and worked at Alcoa for 30 years, retiring in 1996.
George was a member of Local #105 Steelworks Union, Eugene McManus American Legion Post #238 of DeWitt, First Congregational United Church of Christ of DeWitt and was a former member of the DeWitt Noon Lions Club.
George enjoyed following the accomplishments of the DeWitt Central Sabers and the Iowa Hawkeyes. He was an avid fan of high school and collegiate wrestling.
Surviving are his wife, Phyllis; a daughter, Krista Addis of Spring, Texas; a son, Clark (Sally) Elwood of Bay Harbor, Mich.; a granddaughter, Mikaela Addis of Spring; a sister, Frances Melvold of Maquoketa, Iowa; a brother, Henry (Carol) Elwood of Cresco; and numerous nieces and nephews.
In addition to his parents, George was preceded in death by a sister, Mildred Butler.
In accordance with his wishes, there will be no visitation or service. A private family memorial service will be held at a later date. Memorial donations may be made to Reach Unlimited, a Day Habilitation Program for intellectually and developmentally disabled adults, or the Eugene McManus American Legion Post #238 of DeWitt.