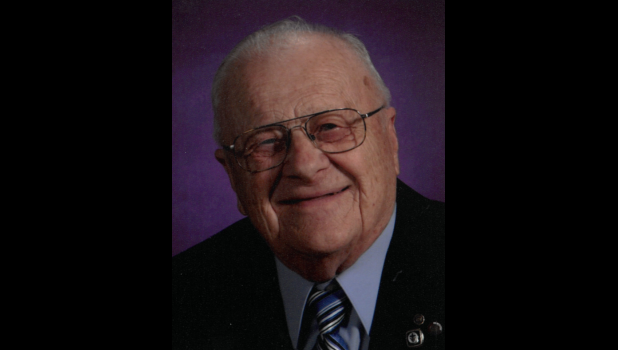 Nov. 21, 1927 —
Jan. 4, 2020
CRESCO - George Vachta, age 92 of Cresco, Iowa, passed away at his home on Saturday, Jan. 4, 2020, surrounded by his family.
Mass of Christian Burial will be held at 11 a.m., on Saturday, Jan. 11, 2020, at Notre Dame Parish in Cresco, with Father Jacob Rouse officiating. Burial will be in Calvary Cemetery in Cresco.
A visitation will be held from 4-7 p.m. on Friday, Jan. 10, 2020, at Hindt-Hudek Funeral Home with a scripture service at 7 p.m. Visitation will continue one hour prior to the time of service Saturday at the church.
George was born in Protivin, Iowa to George and Agnes (Schneberger) on Nov. 21, 1927. He was the oldest of four children. He attended and graduated from Rudolphinum School in Protivin. While attending school, he worked at the general store and mill in Saude, Iowa.
After graduation George joined the Navy. He went to the Great Lakes Naval Base in Chicago for four weeks of boot camp. After that he was sent to the naval hospital in San Diego, Calif. to attend Hospital Corps School. Following that, he went to Operating Technician Training School. For the rest of his naval enlistment, he spent time working in surgery. This training served him well, as upon his discharge he got a job at Cresco Hospital as an operating room technician and later as an x-ray technician. George loved his work at the hospital. When he got off work there, he also had a part-time job at Hoines Drug Store for many years, even after his retirement from the hospital.
He met Teresa (Anderson), the love of his life, at the Mercy Hospital in Cresco, when they got stuck in an elevator together. On April 23, 1951, they were united in marriage at Assumption Catholic Church in Cresco. They became parents of three children, Linda, and twins, Tom and Don. They lived in Cresco all of their life.
George enjoyed camping with his wife, children and later with his grandchildren. He and Teresa led a marriage encounter group for young couples for several years. He was a member of the Calvary Cemetery Board for many years and belonged to the American Legion Post of Cresco. The couple took trips throughout Canada and the United States. They also made a trip to Germany.
George loved to spend time in his shop making toy boxes, farm sets, cradles and various other wood projects for his family. He loved to spend time with his children, grandchildren and great-grandchildren.
George is survived by his two children, Linda (Ken) Hemesath of Waucoma, Iowa and Tom (Mary Ellen) Vachta of Cresco; four grandchildren and his seven great-grandchildren, Lonnie Langreck and Lincoln, Dr. Laura (Mark) Smith and Claire Teresa, Mary Grace, Ethan and Emily, Tyler (Jessi) LeClear Vachta and Antalya and Aurelia and Brian (Yokuthon Metinova) Vachta; and his brother, Ed Vachta of Wellman, Iowa; along with many nieces and nephews.
He was preceded in death by his parents; his wife, Mary Teresa on Oct. 23, 2008; his son, Don on Aug. 7, 1975; his sister, Millie (Leo) Kolbet; his sister, Mary (Jerry) Jacoby; and his sister-in-law, Ethel Vachta.
In lieu of flowers, memorials are preferred to Howard County Community Hospice.