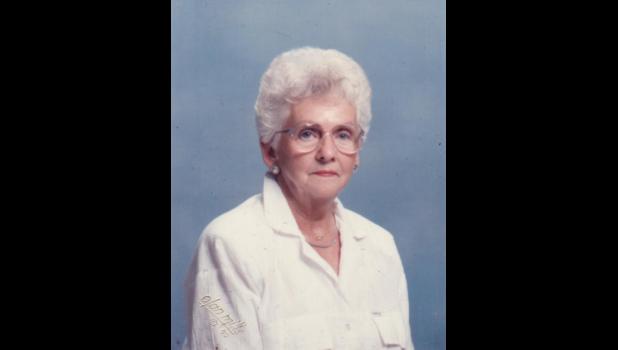 July 27, 1919 —
Jan. 22, 2018
CRESCO -  Hazel Barnhart, age 98, of Cresco, Iowa passed away Monday, Jan. 22 at Patty Elwood Center.
Funeral services will be 10 a.m. Thursday, Jan. 25 at Cresco United Methodist Church. Friends may call on Thursday from 9 a.m. until time of services at the church. Burial will be 3:30 p.m. at Winfield Scott Township Cemetery in Winfield, Iowa. Lindstrom Funeral is assisting the family.
Hazel Barnhart was born July 27, 1919 at Marsh, Iowa. Like so many small villages, it no longer exists. Her parents were James and Lula Crawford. They raised her on a farm with seven brothers and a sister who died in childhood. There was plenty of washing, ironing, cleaning, gardening and canning for her with a family that size. While in high school, Hazel enjoyed playing basketball, as well as playing guitar and singing in a band with her brother.
On Feb. 14, 1940, Hazel married John Barnhart at the Methodist parsonage in Mt. Pleasant, Iowa. They had two children, Jerry Barnhart and Ronna Beckmann. John and Hazel lived and farmed in the Crawfordsville, Iowa area for 20 years, moving to Tipton, Iowa in 1960.
Hazel worked at several retail stores in Tipton before owning and operating Stanwood Hardware for many years. After selling the business, she realized a lifelong dream and became a cosmetologist. She owned and operated her own beauty shop, Hazel’s Headquarters, in Stanwood, Iowa. During these years, the couple took up golf. Most golfers never have a hole-in-one; she had two.
Hazel was an accomplished seamstress, making many of her daughter’s clothes. She also enjoyed counted cross-stitch, crocheting and making hand-sewn quilts.
Travel was one of her passions, taking trips to England, Ireland, Scotland, Hawaii, the Panama Canal, Canada and much of the United States. She spent many winters in Arizona. She loved to drive. When she was well into her 80s, she drove unaccompanied to Colorado.
Possessing a green thumb, Hazel always had beautiful flowers and gardens. Now she enjoys the beautiful flowers and gardens at her new home.
She was a wonderful daughter, wife, mother, grandmother, great-grandmother and great-great-grandmother.
She is survived by her son, Jerry (Margo) Barnhart of Greeley, Colo.; a daughter, Ronna (Ray) Beckmann of Ridgeway, Iowa; grandchildren, Scott (Diane) Barnhart of Windsor, Colo., Eric (Shannon) Barnhart of Sheldon, Wash., Bonnie (Kent) Georgi, of San Diego, Calif., Brooke Beckmann of Ridgeway and Ryan (Jane) Barnhart of Greeley; great-grandchildren, Andrew and Jenna Barnhart, Josh and Sean Barnhart, Carson Barnhart, Logan Barnhart, Hana and Zoey Beckmann and Emma Georgi; and a great-great-grand-daughter, Anastasia Barnhart; along with many nieces and nephews.
She was preceded in death by her husband, John; her grandson, Brett Barnhart; her parents; seven brothers, Ralph, Chet, Earl, Raymond, Morris, Dean and Lyle; and a sister, Norma Crawford.