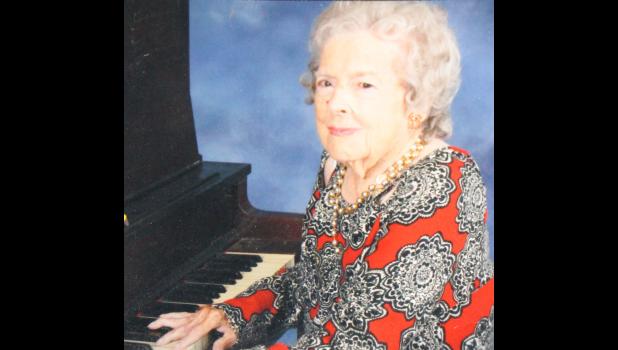 Feb. 9, 2018
CRESCO - Helen Elizabeth Landswerk, age 92, died Friday, Feb. 9, 2018 at Evans Memorial Home in Cresco, Iowa.
Funeral services will be held at 11 a.m. on Tuesday,  April 3, 2018 at First United Methodist Church, 310 N. Elm St., Cresco, with interment in Cedar Hill Cemetery near Zion United Methodist Church rural Cresco. Visitation will be held one hour before services at the church.
Helen Elizabeth (Schumann) Landswerk was born on a farm in Albion Township, Howard County, Iowa on March 28, 1925, the daughter of Edward Henry G. Schumann and Thenora (Sinland) Schumann. The farm she was raised on dates to the 1880s. Helen was the youngest of five children, two half siblings living later in California and two full brothers, Harding and Gale living in Howard County.
Helen grew up during the Depression. She was baptized on May 3, 1925 and confirmed on Nov. 29, 1936. As a young child, she and her brothers would pick corn by hand and were paid 4¢ a bushel. The three attended Nichols country school and would either go by horse or walk. The students were expected to carry wood for the pot-belly stove to heat the school. Her brother Gale would build the fire in the stove, and after he graduated from the eighth grade, it was Helen’s turn to take on this responsibility.
She had a pony named Blackie that would pull a homemade cart. A special treat for her was to take the pony to town and see her friend, Helen Lyons, and stay overnight. After eighth grade, Helen took Normal Training at Cresco High School, so she could teach. This was a specialized program back then, and she had to take many tests to get her certificate. While in  high school, Helen played the violin in the orchestra, she also worked at Clemmers Cafe, a nice place for the kids to gather after school. She made $7.00 a week.
After Helen graduated, she was too young to teach, but since they needed a teacher in the middle of the year. She was able to get special permission to teach. She earned $50.00 a month and stayed in someone’s home and walked to school. She thought she was rich, earning that much money.
On Jan. 1, 1949, Helen married Curtis John Landswerk at the Evangelical Church in Cresco. To this union, a daughter, Donna Marie, was born. They farmed near Schley, later farming around Ridgeway, Iowa and finally farming near Kendallville, Iowa. In 1959, the couple divorced, and Helen made her home on the family farm north of town with Donna.
In 1966, she graduated from Upper Iowa University in Fayette, Iowa with a BA Degree in education. She taught school in the Howard and Winneshiek areas and in Tuthill, S.D. She was president of the VFW Post No. 4561 Ladies Auxiliary for two years and received a lifetime membership to the VFW National Home for Children.
Helen would help other VFW presidents in various tasks, put flags out at the cemeteries for veterans, sold buddy poppies and sent boxes and letters to the soldiers in the service. She would help at funeral lunches and church dinners. She played the piano until she was 90 for Zion United Methodist Church, rural Cresco. She enjoyed working with the choir and youth fellowship. For a time she taught Sunday School at Fremont Lutheran Church. Helen was also church treasurer for many years. She was involved in 4-H, bowled on a team in Cresco and helped others when needed.
One of Helen’s favorite past times was participating in local county fairs. She would enter a variety of contests, such as pies, jams, candy, pickles, vegetables, flowers and photography. She received many ribbons for her efforts and much satisfaction for the fact that she helped promote the fairs with her exhibits.
Helen will be missed by many, as she took the time to visit those in the nursing homes, to remember those who had passed and those left behind to grieve. She was a very giving person, sharing whatever she had with others, whether it be garden produce or homemade goodies. She took the time to listen and give an encouraging word or smile to young and old alike. She particularily enjoyed babies and little ones and their antics.
Helen is survived by her daughter, Donna Marie Landswerk of Cresco; a sister-in-law, Betty (Harding) Schumann of LaPorte City, Iowa; and many nieces and nephews.
Preceding her in death were her parents; her former husband, Curtis Landswerk; brothers, Harding Schumann of LaPorte City and Gale Schumann of Cresco; halfbrother, Donald Schumann; and half-sister, Faithe Schumann Orem, both of California.
Memorials may be directed to the family, Donna Landswerk, P.O. Box 372, Cresco, IA 52136.