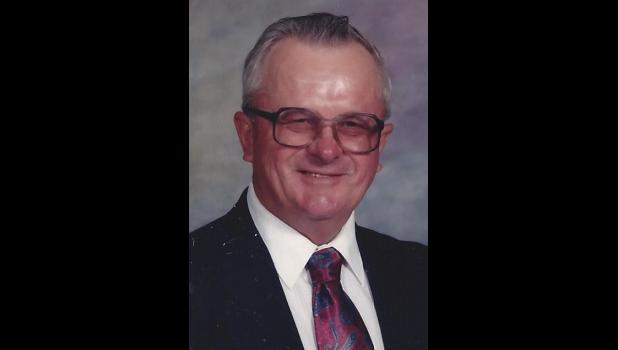 June 4, 1932 —
May 24, 2018
Protivin - Leonard Pecinovsky, age 85, of Protivin, Iowa, peacefully passed away with his daughters by his side on Thursday, May 24, 2018 at Evans Memorial Home in Cresco, Iowa.
Mass of Christian Burial will be held at 10:30 a.m. Saturday, June 9, 2018, at Holy Trinity Catholic Church in Protivin, with Father Kyle Digmann presiding. Burial with military rites will be held at Holy Trinity Cemetery. Visitation will be held from 4-7 p.m. on Friday, June 8, at Hindt-Hudek Funeral Home in Protivin and will continue for one hour prior to Mass at the church. Recitation of the Rosary will be at 5 p.m. on Friday, June 8 during the visitation with a wake service following the visitation. Hindt-Hudek Funeral Home in Protivin is assisting the family.
Leonard Francis Pecinovsky was born on June 4, 1932 in Howard County, Iowa. He was the son of Leonard and Ludmilla (Praska) Pecinovsky. He graduated from Rudolphinum High School with the class of 1950. After graduation from high school, Leonard enlisted with the United States Army and served during the Korean Conflict from 1953-1955.
On Aug. 31, 1955, Leonard married RoseMary Kriener in Waucoma, Iowa. To this union four children were born, Mervin, Neal, Karen and Janet. The couple raised their children on the family farm.
Leonard enjoyed traveling with Rosie and seeing new places together; a highlight was a trip to Protivin, Czechoslovakia. He appreciated the simple things in life, like a good game of Euchre, fishing and hunting, and he had a great appreciation for polka music and marches. Most recently in his life, a smile would always come across his face when someone arrived with a bag of chocolates.
Leonard spoke the Czech language fluently. He always looked forward to the annual Memorial Day and Czech Days celebrations in Protivin. He was a lifelong member of the Protivin Community Band, American Legion, the Holy Trinity Parish Church and was an overall active member of the community.
Leonard is survived by his children, Neal (Sandy) Pecinovsky of Mason, Mich. and their children, Logan and Sean (Chelsey); Karen (Tim) Halvorson of Baldwin, Wis. and their children, Erik, Chris and Alex; and Janet (Greg Stotko) Nulty of Hastings, Minn. and her children, Lynna, Elizabeth and Ryan. Also surviving is grandson, Darren (Heather) Pecinovsky, son of the late Mervin Pecinovsky; four great-grandchildren, Brenna and Emmitt, Ava and Emery; and two sisters, Mary Pecinovsky of Protivin and Diane (Gary) Stejskal of Oelwein, Iowa.
He was preceded in death by his parents, Leonard and Ludmilla Pecinovsky; his loving wife of 33 years of marriage, RoseMary (1988); a son, Mervin (2013); a sister, Ann Recker; brothers-in-law, Leonard Recker and Robert Pecinovsky; and a son-in-law, Jim Nulty.
Online condolences may be left at www.Hindthudek funeralhomes.com.