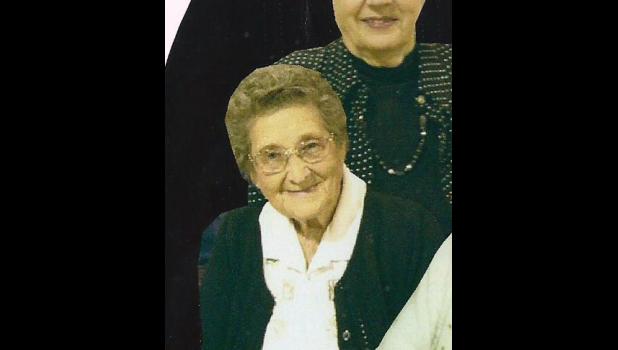 Cresco -  Madeline Ryan, age 102, of Cresco, Iowa died Friday evening, Jan. 13, 2017 at the Evans Home in Cresco.
A Mass of Christian Burial was Jan. 17 at Notre Dame Catholic Church in Cresco with burial in Plymouth Rock Cemetery.
Madeline was born Feb. 11, 1914 to Frank and Johanna (Valenta) Hauber on the family farm between Spillville and Ridgeway. As a child she stayed with her grandmother in Calmar during the week so she could attend Catholic grade school and attended Calmar High School. She married Joe Ryan on Aug. 22, 1933 at St. Wenceslaus Catholic Church in Spillville; it was a double wedding with her sister Florence, who married Roy Zahasky.
Madeline lived on and helped her husband work the same farm from the day they were married in 1933 until 2009, when she entered the nursing home. Following her husband's death in 1971, Madeline continued to farm as long as she was able.
She was a hard worker; she took care of the hogs and chickens while her son Ron farmed the cropland. Madeline always had a large garden from which she canned a lot of produce and had plenty of strawberries when they were in season. Over the years she patched a lot of clothes for her children and grandchildren. Madeline was a good cook known for her Spanish rice, kolaches and gumbo soup. She loved music and played the piano and organ; on T.V. she enjoyed watching figure skating. She had two favorite dogs on the farm, Tipper and Pedro.
Madeline is survived by three children, Ron (Elaine) Ryan of Harmony, Minn., Gary Ryan of Chandler, Ariz. and Sharon (Richard) Otteson of Stewartville, Minn.; 12 grandchildren, Terry, Randy, John, Mark, David, Rhonda, Randeen, Colleen, Tina, Tammy, Tracy and Dan; and one sister, Eileen Sbiral of Ft. Atkinson, Iowa.
She was preceded in death by her parents; husband, Joe; a daughter, Dorothy Ryan; two grandchildren, Sheryl Ryan and Joseph Ryan; a great-granddaughter, Jordan Onstott; and three sisters, Helen Anderson, Bea Novak and Florence Zahasky. She was further preceded in death by Elaine Ryan’s children, Rodney, Ricky and Roxanne and a grandson, Anthony.