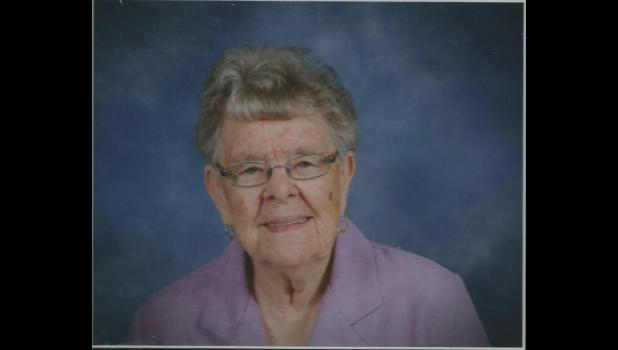 Jan. 6, 1926 —
July 14, 2019
CRESCO - Marge Jackson, age 93, of Cresco, Iowa passed away on Sunday, July 14, 2019 at Evans Memorial Home in Cresco.
Services will be at 11 a.m. on Monday, July 22, 2019 at United Methodist Church in Cresco. Visitation will be one hour prior to the service.
Margery “Marge” Laverne Jackson was born on Jan. 6, 1926 in Cresco to Irwin and Anna (Telford) Eaton. She graduated from Cresco High School in 1944. She married the love of her life, Ben Jackson, on July 15, 1945 at her parents’ home in Cresco. They were married for 72 years.
During the war, Marge worked for Collins Radio in Cedar Rapids, Iowa. She spent several of her working years at the Cresco Motel and the Montgomery Ward Catalog Store. She held many volunteer roles in the community. She was the Campfire Leader for the Girl Scouts and the circle leader at church. Marge also was very active in the VFW Auxiliary and held several offices, including president both on a local and district level and was the editor of the VFW newsletter for 14 years.
Traveling to warmer weather was a highlight each winter. Ben and Marge were able to spend 26 winters together in McAllen, Texas.
She loved to rollerskate, study genealogy, crochet and work with her needlework projects. She made sure all of her pictures were tucked away in photo albums. Marge looked forward to a cup of coffee and weekly conversations with friends and family.
She is survived by her five children, Ann (Ralph) Billick of Tipton, Iowa, Jean Jackson of Marion, Iowa, Judy (David) Tupy of New Market, Minn., Robert “Oscar” (Patty) Jackson of Cresco and Marian “Rose” (Tim) Gates of New Prague, Minn.; 11 grandchildren, Kim, Mike, Shelby, Sara, Luke, Kelsey, Mitch, Chad, Jamie, Rachel and Jennifer; 17 great-grandchildren, Maggie, Madalyn, Mike, Audrey, Ethan, Graham, Cale, Drew, Ben, Jackson, Carson, Bryce, Olivia, Mason, Lexus, Alayna and Alex; and a sister, Gwen (Arnie) Peter of Cresco.
Marge was preceded in death by her parents; her husband, Ben in 2018; and a sister, Nancy Jackson.