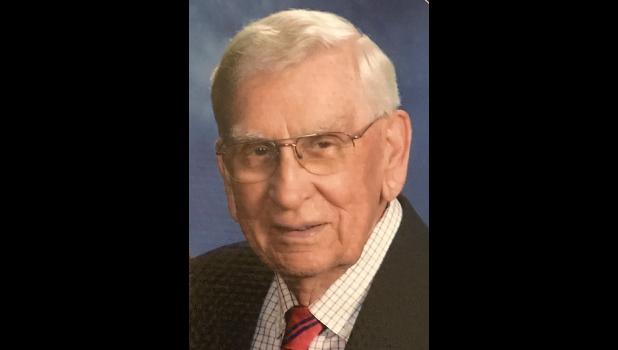 Oct. 19, 1929 —
Sept. 29, 2019
HUBBARD - Marvin Nygaard, age 89, of Hubbard, Iowa, passed away on Sunday, Sept. 29, 2019 at Hubbard Care Center.
Funeral services for him will be held on Saturday, Oct. 12, 2019 at 10:30 a.m. at the Faith Evangelical Church in Radcliffe, Iowa. Burial will follow in the Hubbard Cemetery. The family will receive friends on Friday, Oct. 11, 2019 from 6-8 p.m. at the Faith Evangelical Church.
Contributions given in Marvin’s name will be donated to his favorite charities. For more information go to: www.boekefuneralhomes.com.
Marvin Richard Nygaard was born on Oct. 19, 1929 in Fargo, N.D. to Monrad and Lila (Avery) Nygaard. The family moved to Cresco, Iowa when Marvin was 12, where they operated a crop and dairy farm. The oldest of four siblings, he was active in 4-H, FFA, sports and music at Cresco High School.
He left the farm to enroll at Iowa State College in 1947. Marv worked at the Memorial Union for 15¢ an hour, hitchhiking home on the weekends to help milk cows. He enlisted in the U.S. Air Force during the Korean War mid-way through his junior year and served in Maine. Following his service, he returned to Iowa State and completed his bachelor’s degree in Animal Science. During his senior year, he met Celia Bredlow, a sophomore at ISU, who grew up on a farm near Garner, Iowa.
Upon graduation, Marv accepted a sales position with Armour and Company and moved to Iowa Falls, Iowa. He and Celia married in 1955 and rented an apartment in Eldora, Iowa. After a year, they moved to Clarion, Iowa. In 1960, he accepted a job as assistant manager of the Farmers’ Cooperative in Hubbard, becoming manager later that year when K.F. Boeke retired. Marv retired from the Co-op in 1992 after 32 years of service, growing the company from three to over 70 employees. In 1993 he reorganized his fertilizer-buying group and began operating it out of his home office in Hubbard.
During his tenure at Hubbard Co-op, he served on the regional boards of Farmers Commodities, (now FC Stone), Agri-Industries, Agri Grain Marketing and Waterloo Service Company. He was active in his community, serving on the boards for the Chamber of Commerce, the care center, economic development and the public library and medical center planning committees.
Marv served his church on the building committee, the official board, as church secretary and the mission board. His biggest achievements were supporting and encouraging many missionaries and mentoring family, colleagues and friends. Above all else in this life, Marv wanted everyone to know and follow the Savior.
Marv is survived by Celia, his treasured wife of 64 years; children, Kirk (Gayle) Nygaard of Kona, Hawaii, Bruce (Tricia) Nygaard of Colorado Springs, Colo., Laura (Jay) Herman of Sioux Falls, S.D. and Nancy (Dan) Cook of New Providence, Iowa; grandchildren, Brent (Brittany) Nygaard of Cape Town, South Africa, Alyssa (Davis) Thompson of Des Moines, Iowa, Henry Herman of Bozeman, Mont., Kelsey Nygaard of Chicago, Sophie (Jesse) Lang of Osh, Kyrgyzstan, Calvin Cook of Cedar Falls, Iowa, Ty (Addie) Cook of Ames, Iowa and Lenae Nygaard of Amsterdam, Netherlands; great-grandsons, Hector Lang and Zakes Nygaard; sister, Malvera Wohlsdorf of Cresco; brother, Stanley Nygaard of Florida; and many nieces and nephews.
He was preceded in death by his parents; his sister, Beverly Babinec; and brother-in-law, Roger Wohlsdorf.