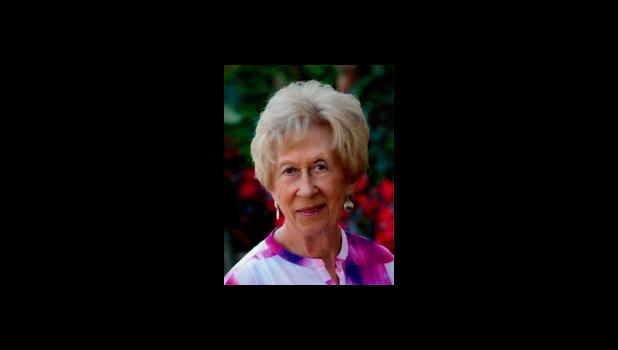 Oct. 18, 1938 —
July 18, 2019
CRESCO - Mary Jean Moore, age 80, of Cresco, Iowa passed away peacefully on Thursday, July 18, 2019 at Evans Memorial Home in Cresco.
A Mass of Christian Burial was held at Notre Dame Catholic Church in Cresco on Tuesday, July 23. Burial was in LeMars, Iowa at the Calvary Cemetery. Lindstrom Funeral Home is handling the arrangements.
Jean, as she was known by her family and friends, was born on Oct. 18, 1938, in LeMars to Dr. Paul A. and Mary C. (Heller) Brauch. She grew up in LeMars, attending St. Joseph Grade School and LeMars Central High School. She attended Stephens College in Columbia, Mo. for two years. She then transferred to Iowa State University and graduated in 1961 with a B.S. degree in Home Economics and Textiles & Clothing Merchandising. Upon graduation, she worked as an assistant buyer for Stix Baer and Fuller Department Store in St. Louis, Mo.
While attending Stephens College, she met H. Denis Moore, and they married on June 1, 1963 in LeMars. Denis was the owner and publisher of the Tri County News and St. Clair Chronicle in Sullivan and St. Clair, Mo. They settled in Sullivan and lived there for 18 years. In 1980, the couple decided to sell the newspapers, and in 1982 they purchased the Times Plain Dealer in Cresco. Jean was active in helping Denis publish the newspaper. They raised two sons and continued to publish the newspaper until selling the business in 1995.
In 1997, tragedy struck, and she lost Denis to a heart attack. She continued forward with the support of family and many friends, continuing to live in and support the Cresco community.
Jean enjoyed watching her grandchildren grow up and celebrating holidays, birthdays, sporting events and trips with them. The family pets were also the center of attention during these times.
She was very active in clubs and volunteering in the communities in which she lived. Jean enjoyed being away from the cold winters of Cresco in her home in Ft. Myers, Fla., continuing her passions only in a warmer climate, a dream she and Denis shared up to his death. She had many interests that she actively pursued, including golf, bridge, cooking, theatre, fine dining and travel. She achieved one of golf’s major milestones, a “hole in one,” on her birthday, Oct. 18, 1991 taking place on hole #17 at the Eagle Ridge Resort in Galena, Ill. Golf was an activity she truly enjoyed and continued to play the game up until near her death. Family and friends were important to Jean, and she continued to stay in contact with them, including her college friends, the “supper club” group in Missouri, her winter friends in Ft. Myers and the many friends she has made in the Cresco community.
Jean is survived by two children, Michael (Heather) Moore of Waxhaw, N.C. and Mark (Kristina) Moore of Bixby, Okla.; two grandchildren, Matthew and Connor Moore of Waxhaw; and a brother, Paul Brauch of LeMars.
She was preceded in death by her husband, H. Denis Moore; her oldest child, Paul Denis Moore; and her parents, Dr. Paul A. and Mary C. Brauch.
In lieu of flowers, please consider a donation to Hospice of Howard County, American Cancer Society, Evans Memorial Home or Regional Health Services of Howard County.