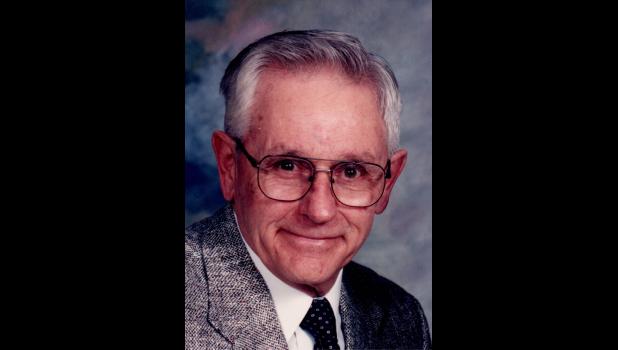 Aug. 12, 1925 —
July 8, 2019
CRESCO - Merlin Chester Kratz, age 93 of Cresco, Iowa, passed away peacefully on Monday, July 8, 2019 at Evans Memorial Home in Cresco, with his family by his side.
Funeral services were held on July 13, 2019 at Immanuel Lutheran Church in Cresco. Burial was in Oak Lawn Cemetery in Cresco with military honors.
Merlin Kratz was born on Aug. 12, 1925 to Wesley and Olive (Natvig) Kratz on a farm southeast of Cresco. He attended rural grade school and graduated from Cresco High School in 1943. On Sept. 12, 1950, he married JoAnne Henkes at Immanuel Lutheran Church in Cresco. This past September, they celebrated their 68th wedding anniversary. They were blessed with one daughter, Jane.
Following graduation, Merlin was drafted at the age of 18 into the United States Army. While there, he attended Paratrooper School in Fort Benning, Ga. On his 20th birthday, he was aboard the third airplane to land in Japan after the atomic bomb was dropped. He witnessed all the devastation first hand during the Army Occupation of Japan. Merlin received his honorable discharge on April 24, 1946.
After returning home from the war, he began working for Hawkeye Tri-County REC and was employed there until his retirement in 1988. He was a member of Immanuel Lutheran Church in Cresco, serving on the church council as well as other committees. Merlin was a member of the American Legion for 66 years. He was also a member of the Howard County Historical Society.
In his early years, he enjoyed hunting and fishing, both locally and in Canada. He was skilled in fine woodworking, making and refinishing many pieces of furniture for family and friends. Merlin often donated wood items to various organizations, such as Immanuel Lutheran Church, Regional Health Services of Howard County, Cresco Public Library and Howard County Historical Society. He and JoAnne enjoyed traveling, antiquing and flower gardening, but most of all being with family and friends.
Merlin is survived by his wife, JoAnne; daughter, Jane (Kirk) Benda of Woodstock, Ill.; grandson, Brandon (Kristi) Benda of Woodstock; granddaughter, Brennae (Torrence) Wright of Garland, Texas; great-granddaughter, Brynleigh Benda and twin great-grandchildren, Keaston and Kaleigha Wright; sister, Norma Haueter of Thousand Oaks, Calif.; brother, Harvey Kratz of Woodbine, Md.; sisters-in-law, Marcella Keune and Mary Lou Murray of Cresco; and many nieces and nephews.
Merlin was preceded in death by his parents; his brother, Arnold (Shirley) Kratz; his sister, Eleanor (Oak) Sovereign; brothers-in-law, Dale Keune and Raymond Murray; and sisters-in-law, Gloria Kratz and Hazel Kratz.
Memorials may be directed to Oak Lawn Cemetery and Howard County Hospice.