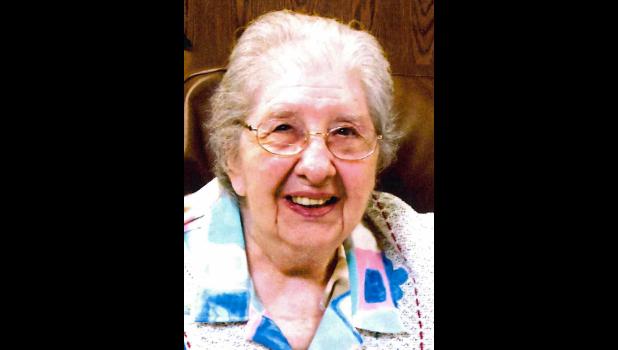 April 24, 1926 —
April 25, 2017
Elma -  Rosalie M. Meier, age 91 of Elma, Iowa passed away on Tuesday, April 25, 2017 at Colonial Manor in Elma.
A Mass of Christian Burial will be held at 10:30 a.m. on Friday, April 28, 2017 at Immaculate Conception Church in Elma, with Father Mark Murphy celebrating. Burial will be at Calvary Cemetery in Elma. Online condolences for Rosalie’s family may be left at www.conway-markhamfh.com. Memorials may be directed to the family.
Rosalie Maria Meier was born April 24, 1926 in Hazelton, Pa. to George and Alice (Ansbach) Sasacek. Alice passed away when Rosalie was two years old. She then was raised by her aunt, Frances  Ansbach, in Blue Mountain, Pa. She worked various jobs before moving to Illinois.
Rosalie met Harold Meier, and they were married on Nov. 5, 1955 at Immaculate Conception in Elma. The couple made their home on a farm north of Elma and welcomed one daughter, Susanne. They moved into town when they retired in 1988.
Rosalie was active in the church with the Rosary Society and CCD. She enjoyed farming with Harold, gardening, baking and watching Cubs baseball.
She is survived by her daughter, Susanne (Douglas) Guy of Osage, Iowa; her grandchildren, Jeremy (Heather) Klobassa of Osage, Daniel Klobassa of Riceville, Iowa and Rachel (Cameron) Byrnes of Clear Lake, Iowa; her step-grandchildren, Sarah (Rick) Laganiere of Grand Meadow, Minn. and Shelly Guy of Stewartville, Minn.; 13 great-grandchildren; her brother-in-law, Francis (Lois) Meier of Elma; and several nieces and nephews.
Rosalie was preceded in death by her parents; her husband, Harold in 2012; her brother, George, Jr.; and several brothers-in-law and sisters-in-law.