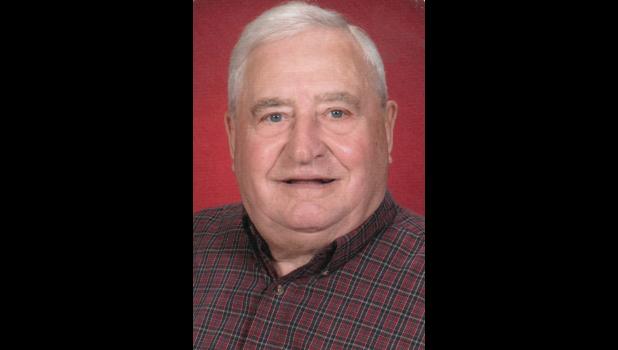 Aug. 25, 1921 —
March 8, 2020
CRESCO - Theodore “Ted” L. Crow, age 98, of Cresco, Iowa passed away on Sunday, March 8, 2020, at Evans Memorial Home in Cresco.
A private family Mass of Christian Burial will be held.
Theodore “Ted” Crow was the oldest of four children, Ted, Vera (Burkland), Charles Jr., and Evelyn (Hurst), born to Charles and Mathilda (Malota) Crow on Aug. 25, 1921. He graduated from Cresco High School and later married his sweetheart, Mildred (Hosek) on Dec. 28, 1941 at Holy Trinity Catholic Church in Protivin, Iowa. They were the proud parents of 10 children, two daughters and eight sons.
Mildred passed away in December 1990 and about 18 years later, at a dance, he met EdnaMae Fagner, of the Cresco area and they were married on May 30, 2009.
Ted and Mildred farmed just west of Protivin for about 25 years and then moved into Cresco, where they were members of Notre Dame Catholic Church. Ted was a man of many talents and skills. He farmed while working in the Howard County engineer’s office and surveying roads. Later he sold insurance for about 25 years and was always willing to lend a hand wherever help was needed. He believed and lived by the motto that if you were going to do something, then you better do it well.
He was a proud and active member of the Protivin Knights of Columbus, starting their first regular monthly newsletter; a member of Life Underwriters Association, earning his CLU designation; Kiwanis Club;, and Cresco Country Club.
Some of his many passions included flying his own airplane, golfing, building clocks, woodworking and building a train to give rides on for many of his 34-grandchildren and great-grandchildren to enjoy. Ted and Mildred loved to explore and traveled to many countries throughout the world. He said “The Good Lord put the earth here for us to enjoy. Let’s go see it.”
Ted will be deeply missed by all who knew him.
He is survived by his children, Edith Humpal of Calmar, Iowa, Theodore (Nancy) Crow of Johnston, Iowa, Gerald (Myra) Crow of Savage, Minn., Richard (Cindy) Crow of Double Oak, Texas, Kenneth (Sung) Crow of Fort Pierce, Fla., Donald (Colleen) Crow of Peoria, Ill., Cynthia (Dale) Carlton of Seattle, Wash., Kevin (Colleen) Crow of Cresco, John (Virgina) Crow of San Diego, Calif. and Ronald (Virginia) Crow of Bloomington Minn.; 34 grandchildren; 35 great-grandchildren; 11 great-greatg-grandchildren; and his sister, Evelyn Hurst.
He was preceded in death by his parents, Charles and Mathilda Crow; wife, Mildred Crow in 1990; sister, Vera (Oden) Burkland; brother, Charles “Junior” (Ivanelle) Crow; brother-in-law, Frank (Evelyn) Hurst; daughter-in-law, Linda (Richard) Crow; daughter-in-law, Alicia (Kenneth) Crow; son-in-law, Lester (Edith) Humpal; and wife, EdnaMae Crow.