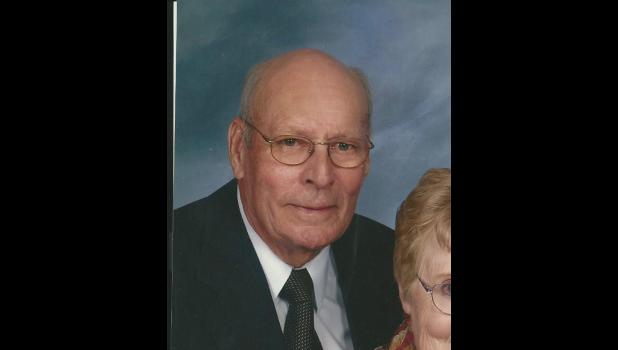 Sept. 19, 1927 —
Oct. 31, 2017
CRESCO - Walter Jerome Brenno, age 90, of Cresco, Iowa, passed away peacefully on Tuesday, Oct. 31, 2017 after a short illness.
Memorial services will be 3 p.m. Monday, Nov. 6, at Peace Lutheran Church in Ridgeway, followed by a Celebration of Life at 4 p.m. at the Ridgeway Community Center. Friends may call at the church on Monday from 1:30 until time of services. Lindstrom Funeral Home in Cresco is assisting the family.
Born in Ridgeway, on Sept. 19, 1927, to John Brenno and Caroline (Lena) Anderson, Walter attended country school and Ridgeway High School. He worked for many years on the family farm. An entrepreneur by nature, Walt owned and operated Brenno Mobile Mill for several years before selling it and becoming Manager of Winneshiek Co-op in Ridgeway. After that, he started Brenno Excavating, where he successfully worked for several years. He also worked at the Ridgeway Post Office, where he was promoted to Post Master until he retired in 1989.
Walter married Mary Beth Christianson Siddell in 1965, becoming a loving stepfather to five children. They had three more children. Walter enjoyed life to its fullest. He had a very strong work ethic and an equally strong belief in enjoying life. From summer camping trips with family and friends to frequent get-togethers with friends around town, Walt never knew a stranger and made everybody feel welcome. He made any activity fun with his light-hearted sense of humor. It wasn’t unusual for the various people he met through the years to spontaneously stop by the house to say “Hi,” no matter how much time had gone by. He was a kind-hearted, intelligent man, with a great sense of humor. He had a gift for music, always whistling or singing wherever he went. He enjoyed hunting, fishing, dancing, gardening, wood-working and playing golf. He was also a proud member of the Ridgeway Fire Department from 1961-1988.
Less than a month after celebrating his 90th birthday with a beautiful family celebration, Walt became ill with pneumonia and was hospitalized on Oct. 16. He was diagnosed with advanced cancer two days later and spent his final weeks surrounded by his loving family, friends and the most caring and amazing staff at the Regional Health Services of Howard County. His spirits remained up throughout his final weeks, and he joked with the nurses throughout. In his final days, he told his family, “I feel very peaceful. I have everything I need.”
Walter is survived by his loving wife, Mary. Also, his children and grandchildren, Randy Siddell of Phoenix, Ariz.; Larry (special friend Roseanna) Siddell of Dodge, Wis. [Daniel, Robert, Ryan, Madisen and Reed]; Vicky (Jeff) Combs of Carrollton, Texas [Zach (Karla) and Andrew (Jennifer)]; Terry (Mary) Siddell of Cedar Rapids, Iowa [Josh (Staci), Kendra, Christine (Wes) and Derek)]; Michael (Nadine) Siddell of Murrieta, Calif. [Nicholas]; David (Julie) Brenno of Cresco [Logan and Christopher]; Jean (Craig) Clabaugh of Urbandale, Iowa [Griffin, Gage and Blake]; and Lori Brenno of Des Moines, Iowa. In addition, he is survived by several great-grandchildren, as well as his brother and best friend, Lester (Arlowayne) Brenno from Auburn, Calif. [William, Leslie, Amy and Andy].
Walter was preceded in death by his mother and father; brother, Nayton (Adolph) and his wife, Irene, and their infant son; sister, Janet; and one grandson, Nathan Siddell. He was also preceded in death by several lifelong friends, who are undoubtedly welcoming him with a big celebration in Heaven.