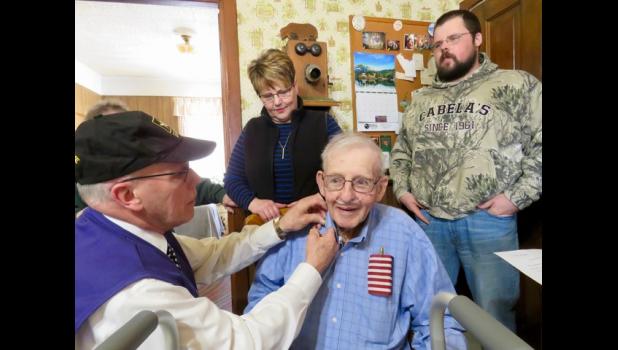 Honoring Ron Hovey
By:
Marcie Klomp ~ News Editor tpdeditor@crescotimes.com
RIDGEWAY - Howard County Community Hospice held its first We Honor Veterans ceremony for Ron Hovey on Wednesday, March 4 at his home in rural Ridgeway.
Staff and volunteers of Howard County Community Hospice and local veterans attended the ceremony in which Hospice Team Chaplin Lisa Kammerer gave the invocation and benediction and Hospice Music Coordinator Cathy Hoffert played patriotic music.
Hospice Volunteer Coordinator Tamara Lickteig thanked Hovey for his military service. “On behalf of Howard County Community Hospice, please accept our thanks and gratitude. When you see this pin, know that your service to the nation is deeply appreciated. We thank you!”
Hovey received a pin, certificate and patriotic pillow case (made by Thursday Morning Quilters). Army veteran Mark Grinhaug, who presented the items, brought a smile to Hovey’s face when Grinhaug said, “Thank you for your service, even if it was in the Navy!”
In addition, Grinhaug  presented Ron’s wife, Karon, with a Proud Veteran Spouse pin.
Hospice RN Vickie Grube said, “We thank you for your selfless service to our nation, and we want you, Ron, to understand just how truly grateful we are as a country and community.”
Hovey then reflected on his service.
“My cousin Raymond Hovey (who was also present) and I served together in the same division and on the same ship. When we got drafted, we both volunteered for the Army but were put in the Navy.”
The cousins’ ship went to the South Pole, where they saw lots of penguins. The scary part of the trip was having blocks of packed ice hitting the ship.
“Ice would crush us and put holes in the ship. We used mattresses or anything to stuff in there. Then they had to tip the ship so they could go on the outside and fix the holes. One time, the captain told us  that at one point we were one degree from rolling over and not coming back.”
The Hoveys served on the USS Arneb, a cargo ship named after the brightest star in the southern constellation Lepus.
When they were stationed on the east coast, they saw the Washington, D.C. monuments and when to New York City to “see the dancing girls (rockettes).” When discharged, they traveled around the country.
Another fond memory is when “Melissa and I toured the USS Iowa several years ago.”
After the ceremony, he related to Grube that during the Hoveys time of service if someone was drafted and had not been in direct combat (such as both Ron and  Raymond), there was no recognition years ago for being in the service.
She added, “This was very special for  him, and we are so happy we were able to have this for Ron and his family.”
Those present during the ceremony were Lickteig, Kammerer, Administrator — Audrey Nosbisch, Grube, Hoffert, Hospice Veteran Volunteers — Grinhaug and Ricky Woods, Hospice Social Worker — Sue Eggerichs, Veterans Affairs — Marshall Rogne, Raymond Hovey, Ron and Karon’s daughter, Melissa Foley, and their grandson, Hunter Foley.
Howard County Community Hospice staff plan to continue with We Honor Veterans ceremonies when a veteran is in their care.