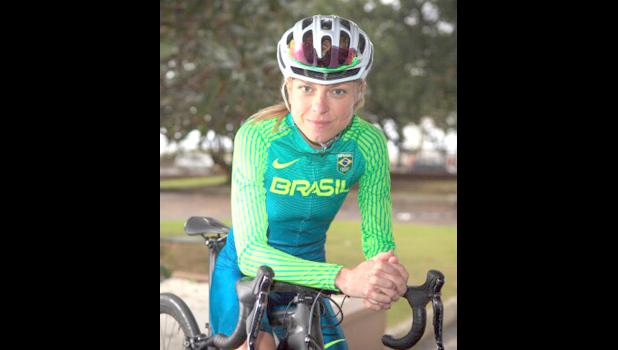 By:
Nate Troy
CRESCO - While RAG-BRAI attracts a wide variety of people from all 50 states every year, it also brings in people from throughout the world.
That was certainly the case this year during RAGBRAI XLV as one of this year’s riders was Flavia Oliveira, a Brazilian Olympic cyclist, who participated in RAGBRAI for the first time with her husband, Nathan. Their hosts in Cresco were Tom and Michele Tuchek.
Oliveira is a past winner of the Mountains Competition in the Giro d’Italia Feminine (Giro Rosa), the Brazilian National Road Champion, and she placed seventh in the women’s road race at the 2016 Summer Olympics in Rio de Janeiro.
After the completion of her RAGBRAI ride on July 29, she shared her experience with the Times Plain Dealer.
TPD: What were a few aspects of RAGBRAI that you enjoyed the most?
Oliveira: Wow, there are quite a few. Being a cyclist I must admit it gave me butterflies of happiness to see so many people on bikes! It seemed like a constant flow of bicycles all day  long.
Oliveira: You get to choose what kind of ride you want your RAGBRAI to be! Roads were incredibly safe, clean, there were First Responders everywhere on the course. You can take it as seriously as you want and then enjoy the party or party all the way through!
TPD: Any unusual or surprising things happen to you during the week you’d like to share?
Oliveria: I was surprised to see how much all the communities were involved with RAGBRAI! Who knew that rural Iowa would embrace the spandex, sweaty and always-ready-to-eat cyclist with such open arms. They also worked hard to ensure everyone was having a good time! It was surprising to see bikes left outside of businesses while riders went inside without worrying about their bikes!! Communities took pride in providing a safe place for riders to ride/ sleep overnight without worrying about their equipment or their safety.
TPD: Were there any specific challenges or obstacles of RAGBRAI that you’d like to talk about?
Oliveira: As a professional cyclist, I am subject to provide a physical address of where I sleep every day of the year as well as daily whereabouts, which makes it hard to just camp out somewhere. I was very fortunate that RAGBRAI organizers understood that special need and helped us with host housing. And of course, I couldn’t say thank you enough to all of the wonderful hosts who opened up their home for us.
TPD: What were a few of your favorite towns you rode through, and what made them unique?
Oliveira: Oh my!  That’s a tough one. They each had their unique flare. But to be honest my favorites were Spencer and Garner and Clear Lake. Who doesn’t like the water/lake after a hot ride? But the ride I enjoyed the most was the one that ended in Cresco! It was a blast!
TPD: Do you plan to ride on RAGBRAI again?
Oliveira: Definitely when I retire from racing.  It’s such a unique experience, there isn’t anything quite like this!!! You must experience it to fully understand it. Right now, I am recovering from a broken pelvis that I sustained in May while training in Spain.  It was refreshing to be out there riding my bike with my husband, who is originally from Iowa (and has done this 21 times) and to rekindle my love for the bike, without stressing over performance.
TPD: Other aspects of the week you’d like to share?
Oliveira: I must say, I was impressed to see the Air Force team out there helping out anyone and everyone who ran into trouble during the ride whether it was a flat tire, a mechanical problem, crashes. I wanted to say thank you! I give a huge shout-out to the guys, T.J. and Scott, from the Des Moines Register who put on the big show!
Oliveira: I must say they got it down to a scientific formula now, and everything was so flawless, including the safety, riding, entertainment. I am sure it’s not an easy job to put on an event of this magnitude!!