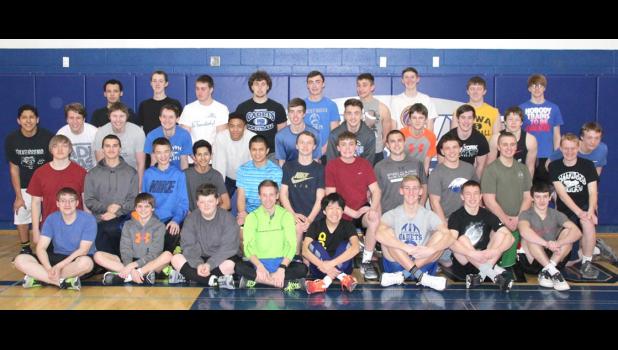 By:
Nate Troy
CRESCO - The 2017 Crestwood varsity boys’ track team will have a good blend of upperclassmen and newcomers this year.
The Cadet boys’ track squad will feature 45 total athletes this season, including six seniors, eight juniors, 12 sophomores and 19 ninth graders.
The seniors include: Spencer Cuvelier, Dylan Johnson, Michael Mashek, Austin McAllister, Casey Ollendieck and Trevor Trende.
Juniors include: Darian Gossman, Chris Guest, Jared Haskin, Raymond Himli, Paul Laganiere, Clayton Ollendieck, Jackson Smith and Dayton Swatek.
Sophomores include: Kody Berns, Isaac Ellis, Boston Ferrie, Jon Henry, Zack Lane, Luis Lares, Johnathon Millage, Blake Murphy, Alex Richardson, Kane Vaughn, Shane Vokaty.
Ninth graders include: Logan Albert, Kael Anderlik, Kamryn Erickson, Colby Frazer, Tyrone Grant, Braden Hayes, Eduardo Jimenez, Bryden Juelsgaard, Nick Knobloch, Daniel Lares, Lucas McGee, David Meinecke, Garret Ollendieck, Wyatt Scheidel, Caleb Shea, Walker Sobolik, Mason Theis, Bryer Thompson and Reece Wilson.
Crestwood Head Coach Chris Lentz is happy to have  almost 50 athletes on the track season in 2017.
“We have a few more freshmen this year compared to what we had last year,” Lentz said. “We lost a few guys to graduation, but we also picked up a few guys this year.”
The Cadets graduated four seniors who competed at the State Track Meet in 2016 including: Riley Wilson (100, 200, 4x100, 4x200), Dalton Kerian (200, 4x100, 4x200), Tristan Bohr (high jump, 4x100, 4x200) and Connor Slifka (4x100, 4x200). Wilson placed fifth in the 100 dash and 19th in the 200 dash at State last year. Cuvelier, who was a junior last year, placed sixth in the discus at State in 2016.
Despite losing some strong seniors, Lentz is optimistic about the talented athletes on the 2017 team.
“With Spencer Cuvelier coming back, we expect him to be strong in the discus,” Lentz said. “Austin McAllister will be in the mix for the top athletes in the long jump. Michael Mashek will be running strong in the two-mile event (3200 meters), and he might compete in a few other events which fit best for him. We’ll get him in whatever events he might have the best chance to qualify for State.”
Lentz added that the team will count on many of the younger athletes to contribute in several events this spring.
“At this point in the season, we are looking to mix and match (students with events),” Lentz said. “We need to see where the sophomores are this year in terms of improvement. We want to see how some of our shot put guys have improved.
“We will need to rebuild our 4x1 and 4x2 relay teams because of the guys we lost to graduation (Tristan Bohr, Dalton Kerian, Connor Slifka, Riley Wilson). Austin McAllister ran as an alternate in some relays last year. He will be the only veteran guy on the relay events,” the coach said.
Recording finishing times during practices and early season meets will give the coach and the athletes a good gauge of where the team needs to improve.
“We need to get some times on our guys (during meets),” Lentz said. “Once we get those times, we can adjust things from there. We’ve timed some guys, but they were just running in the hallway during practices. We were getting ready to run on the track (in practice), but then we got the snow on March 13.
“We will use our indoor meet (at Luther on March 21) as an official timed practice for some events. This meet will give some guys a chance to run, jump and throw the shot put.  We’ve got some young guys who will try the high jump. It’s a little different running during indoor meets because the track is not as long,” Lentz said.
The coach is optimistic the freshmen will make solid improvement during the year.
“We’ve got to get the younger guys (the ninth grade class) immersed into the team and let them know this isn’t junior high anymore,” Lentz said. “When you compete on the varsity, you are sometimes going to compete against other guys who are a few years older than you. I keep telling our guys that we want to peak in May, not March.
“We’ve got a long road to go. We need to find the niche for the guys and our best combinations (for the running and field events). We want to put the best guys on the track and give all the guys a chance to improve every day.”
Lentz said qualifying several guys for State will be a big goal this year.
“We always want to get as many guys to State as possible,” Lentz said. “We had a couple guys place at State last year. Ideally, we’d like to get some more hardware down at State.
“Right now in March, we might have three kids who could possibly qualify for the Drake Relays (in late April). Spencer Cuvelier might have a chance in the discus. Austin McAllister and Michael Mashek have a chance in the running events. We just need to get some times on them,” the coach said.
If the weather warms up soon, that would be a big plus for the squad.