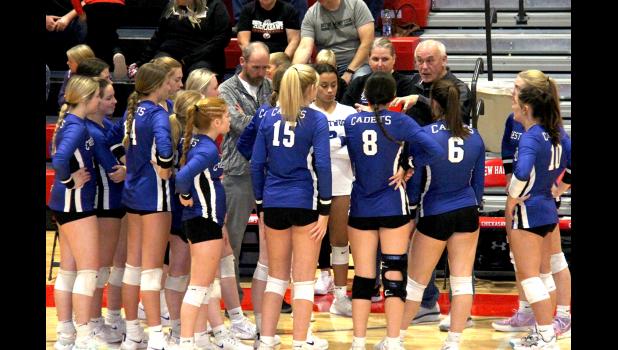 By:
Nate Troy Sports Editor
CRESCO - On first glance, the 12-22 overall record posted by the Crestwood varsity volleyball team might not gain much notice outside of northeast Iowa. However, that final record alone does not come close to doing justice to how hard the Cadets worked during the 2022 campaign.
This year’s Crestwood squad featured nine seniors including: Skylar Henry, Teryn Lukes, Kelly Miller, Britain Ferrie, Tierney Perkins, Shelby Burnikel, Haley Norby-Sill, Hannah Schmitt and Elyse Rissman.
Chyann Bullerman-Yu was the only junior on the team. Sophomores included: Aubrey Mannery, Vienna Nibbelink, Olivia Johnson, Lily Hubka, Lydia Williams and Lily Troendle. Freshman Zoey Mehmert also competed.
Crestwood Coaches included: Robin Gossman, Head Coach; Tony Gossman, Assistant Coach; and Trish Hartman, Assistant Coach. Delaney Gosch was the team manager.
Gossman was proud of the way the Cadets competed hard during every match this season.
“This year the girls didn’t quit during a match,” Gossman said. “They worked hard to overcome that part of their game.”
The coach noted the Cadets showed improvement on offense.
“During the 2022 season, our entire offense was by far the most impressive part of our game,” Gossman said. “Everyone knows that I am a numbers person and every offensive statistic saw improvement.”
The Cadets had 21 assists per set this year compared to 13.9 in 2021. Kills per set increased were 22.4 in 2022 and 15 in 2021 and kill efficiency was .168, compared to .095 last year. Crestwood tallied six aces per set this year compared to 4.2 last year. Serving average  improved to 91.4 in 2022 compared to 88 in 2021.
“These numbers showed that from last year to this year, we showed dramatic improvement,” the coach noted. “Next season, the team will need to receive service much better.”
The coach gave kudos to the nine seniors on the 2022 squad.
“This senior group was very special to our success,” Gossman said. “They bought into the summer workouts and open gym. Many hours of hard work and time were spent trying to improve. "