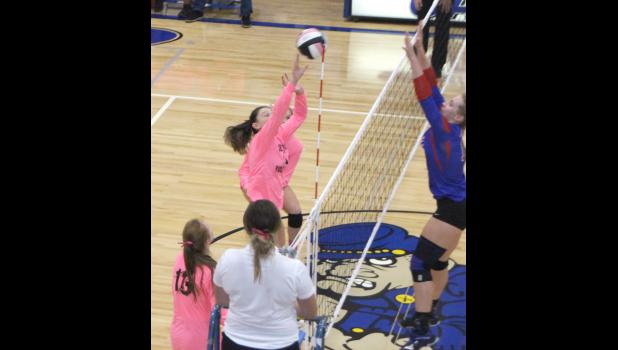 By:
Nate Troy Sports Editor
CRESCO - It definitely was not easy, but the Crestwood volleyball team swept the Decorah Vikings at home on Oct. 1 in three matches (25-17, 32-30, 25-23).
Competing at the Waverly-Shell Rock Tournament on Oct. 5, the Cadets won one of five matches. Crestwood defeated Denver (21-19, 21-19); lost to Dyersville Beckman (7-21, 24-22, 9-15); fell to Mason City (22-25, 17-25); lost to W-SR (17-21, 13-21); and fell to Grundy Center (9-21, 14-21).
Crestwood (13-12 overall) will host St. Ansgar on Oct. 14 at 7:30 p.m. The Cadets will play at Oelwein on Oct. 15 at 7:30 p.m.
Decorah match
A strong group effort allowed the Cadets to bounce Decorah on Oct. 1.
“This was a good team win,” Cadet Coach Robin Gossman said. “As a team we played well together and had great energy. Our serving was the best it has been all year. While our philosophy is to be aggressive and keep teams out of system we need consistency. Defensively we were sound.
“Our next step is to grow on this performance. We defeated a solid Decorah team that is bigger than us in every position across the front with the exception of Sharon Goodman,” Gossman said.
In game one, Crestwood led 6-4 early before six straight serves by Kaylee Ollendieck, which gave the Cadets a 16-8 lead. Decorah cut the lead to 19-14 before Crestwood clinched the win.
Game two was a hard-fought, back-and-forth battle throughout. The Cadets led 7-2 before Decorah tied the game at 10-all. A kill by Sharon Goodman gave Crestwood an 18-15 lead, but the Vikes stormed back to take a 22-20 lead. The lead changed hands five times and the score was tied nine times before a tip by Lexi Hoppe gave the Cadets a 32-30 win.
Game three was close early with each team exchanging points. Crestwood held a 14-11 lead before Decorah tied the game at 16-all. The Cadets held a 24-21 edge before the Vikes cut the gap to 24-23. However, Crestwood was able to secure the final point to tally the win.
Crestwood completed 76 of 80 serves (95 percent), had nine aces, eight blocks, 58 digs, 32 assists and 32 kills.
Kaylee Ollendieck completed 21 of 22 serves, had four aces and 10 digs. Laken Lienhard was 14 of 14 serving, had one ace, 32 assists and 10 digs. Keelee Andera completed 11 of 11 serves, had one ace and three digs.
Sharon Goodman posted 15 kills, had four blocks, completed seven of nine serves and had one ace. Emma Rissman completed 11 of 12 serves, had two aces and 24 digs. Trystin Thompson was 10 of 10 serving and had seven digs.
Memphis Sweeney had six kills and three digs. Kelly Miller and Lexi Hoppe each had four kills. Britain Ferrie had two kills and two blocks.
W-SR Tourney
Coach Gossman was proud of the effort the Cadets showed at the tournament.
“While most people would look at the 1-4 record and think we had a bad tournament, we had a very good tournament,” the coach said. “Throughout the day we played top 10 ranked teams and played them toe-to-toe.
“I was very satisfied with our effort. I really liked our mental state for most of the day. When you are getting beat the brain will usually give up. We did not give up while playing the caliber of teams we played.
“We probably did not serve as well as I would have liked but going into Saturday our only chance was to serve aggressively and try and keep other teams out of system. Every team we played plays club volleyball throughout the entire year. The mental toughness comes from playing Saturday tournaments. We played well but were just out-gunned,” Gossman said.