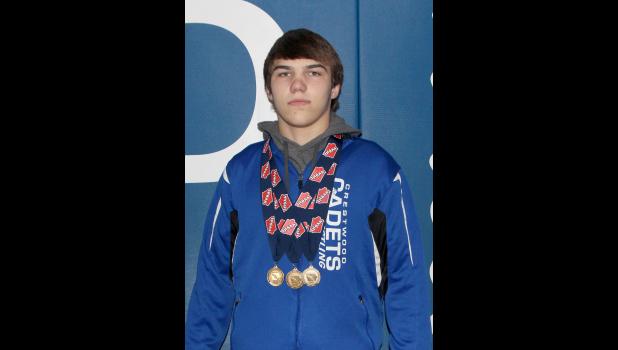 By:
Nate Troy Sports Editor
CRESCO - There is a small, elite and incredibly impressive club when it comes to wrestling in Cresco - grapplers who have won three state titles at Cresco/Crestwood High School.
Prior to the 2020-21 season, that group included only two wrestlers going back to the 1921-22 season: Donald Maland (1932-34) and Tom Peckham (1960-62). When the clock hit all zeros in the Class 2A state finals at 126 pounds on Feb. 20, 2021, that club added one more member: Crestwood junior Carter Fousek, who won a 6-4 decision over Dominik Ridout of East Marshall.
While Fousek was naturally excited to win his third straight title, he’s not the kind of student-athlete who seeks out the spotlight. Talking with him face-to-face, one aspect about him that jumps out is his humility.
When asked if title number three was more difficult than the previous two, Fousek replied, “They were all tough. My coach (Keith Slifka) always tells me after I win a match that the next one will be the hardest one. I know that I’ll need to train just as hard (for the next title) because they’ll all be hard.”
In regards to the 2020-21 season, which forced the cancellation of tournaments in Waterloo, Independence and Aplington because of COVID-19, Fousek said the year wasn’t that much different than previous seasons.
“The aspect of making weight was easier for me because COVID-19 cancelled a few tournaments, which meant I had more time to make weight (for other meets),” Fousek said. “Otherwise, COVID-19 didn’t affect the team too much.”
In the state finals, Ridout was a new opponent for Fousek this season. However, Fousek was familiar with Ridout because they both currently train at Sebolt Wrestling Academy in Jefferson, Iowa. The academy is run by T. J. Sebolt, who won four state titles at Centerville from 2003-06. Fousek has trained at the academy since the third grade.
“The last time I had wrestled (Ridout) was in eighth grade,” Fousek noted. “It’s tougher wrestling someone like him because we both train at the same place and do the same kinds of things (in practice). This year, there were 18 kids who won state titles training at Sebolt Academy.
“In the finals, I knew it would be a close match because we know each other well and have the same tools in our tool box. Going into any match, I tell myself that I’m the better wrestler, I can do things to catch anyone off-guard and I can score points on anyone,” Fousek said.
Winning title number three was just as thrilling as winning title number one in 2019, according to Fousek.
“All the titles have been exciting,” Fousek said. “During my freshman year, I was the most nervous going into the finals that year but they’ve all been fun.”