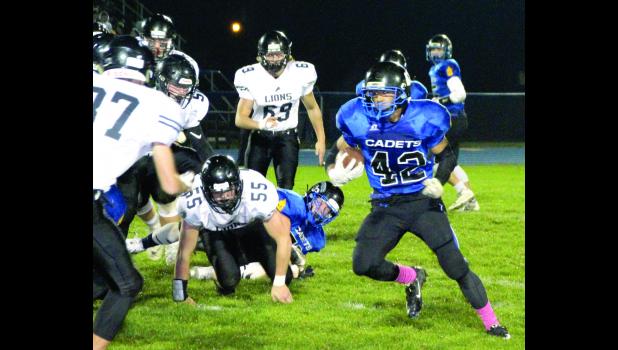 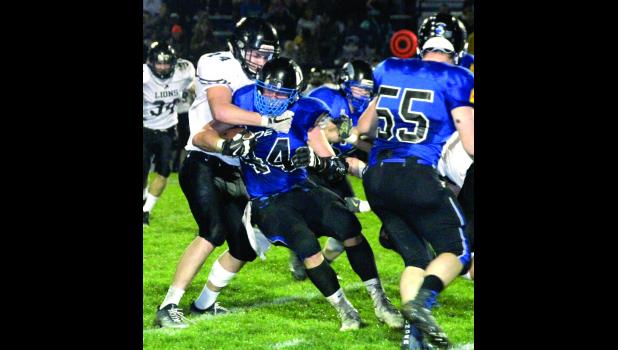 By:
Nate Troy
CRESCO -  A solid group effort by the Crestwood football team was not enough to overcome a rough night on offense Friday as the Class 2A No. 9 Clear Lake Lions shut out the Cadets, 21-0.
Clear Lake held a slim 7-0 halftime edge before the Lions put the game out of reach with two second half touchdowns. The Cadets struggled to gain any momentum on offense throughout the game as they finished with only 42 total yards, including negative 32 yards rushing.
The loss dropped Crestwood’s overall record to 4-4 and 4-2 in District 2. Clear Lake holds the top spot in the district at 6-0 while New Hampton is second at 5-1. Osage and Crestwood are currently tied for third place with identical 4-2 records.
Although the Cadets are not officially eliminated from securing a playoff berth, they will need some help during the final week of the regular season. Crestwood will play at Forest City (0-8) on Friday, Oct. 20. To gain a playoff berth, the Cadets will need New Hampton to beat Clear Lake and Osage to lose to Garner-HV on Friday.
Cadet Head Coach Chris Lentz said it was difficult moving the ball Friday against Clear Lake’s defense.
“That was a tough game,” Lentz said. “We played pretty solid on defense during the first half. We gave Clear Lake a short field (which led to its first score), and that’s always a bad deal, but we still did some good things.
“Clear Lake had a tough time moving the ball on us in the first half, but they wore us down a little bit. They are a big team, especially with their offensive line. They were kind of bulldozing us. They kind of punched us in the face, kept hammering at us and we couldn’t snap out of the funk we were in,” Lentz said.
The coach noted Clear Lake utilized their blitzes well to disrupt the Cadets on offense.
“Clear Lake got ahead (on the scoreboard) and they could sell out by blitzing,” Lentz said. “They had more speed, and they were able to cover us man-to-man. We didn’t have enough guys to block them because they were sending everyone on defense.
“We didn’t execute the way we needed to on offense. We’ll take a good, hard look at the film, get things fixed and get after Forest City next week,” Lentz said.
Another factor that hurt the Cadets was losing senior tight end and defensive back Clayton Ollendieck to an injury less than one minute into Friday’s game. On Crestwood’s second play from scrimmage, Ollendieck caught a pass from Jon Henry and was driven out of bounds by a Clear Lake defender. Ollendieck dislocated his shoulder on the play and missed the rest of the game.
“Losing Clayton (to the injury) takes out one of our better players on offense and defense,” Lentz said. “It’s a bad deal, but that’s football. That’s why we have 28 guys on our team. When someone goes down with an injury, others have to step up.
“Our seniors are a tight-knit group, and they are missing one of their buddies. Clayton is one of our go-to guys on offense. His shoulder is dislocated, so we don’t know if he’ll be back for the Forest City game.
“If Clayton can’t play, we’ll put someone in there (to take his place). We’ve got to keep playing as a team and a family. We’ll lick our wounds from this game. We still have a possibility of making the playoffs if we take care of business against Forest City and see what happens with the other teams (New Hampton and Osage) next week,” Lentz said.
Even though Forest City will come into the Oct. 20 game against Crestwood with an 0-8 mark, Lentz noted the Cadets will not overlook them.
“We can only control what we can control (with the district standings),” Lentz said. “Forest City hasn’t won a game yet, but they are a good, solid football team. I’m sure they will pin their ears back and come at us because they’ve got nothing to lose, but we’ll get after them.
“We were a little out-gunned in terms of size against Clear Lake. We need to block better (against Forest City), and we’ll learn a lot from the film. The guys can’t get discombobulated and forget what we teach them all week (during practice).
“Our guys will get better and come out like gangbusters next week. Our kids play hard all the time. In the second half against Clear Lake, we just couldn’t get our defense off the field, and we couldn’t get anything going on offense,” Lentz said.