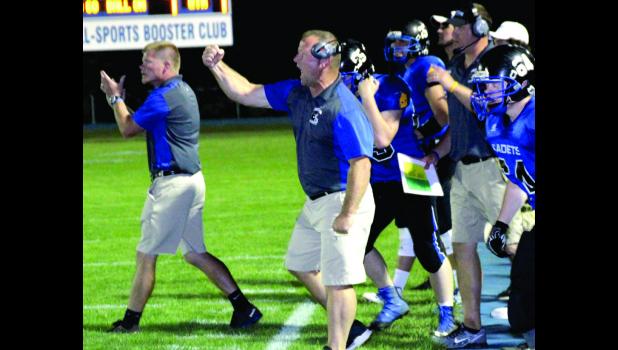 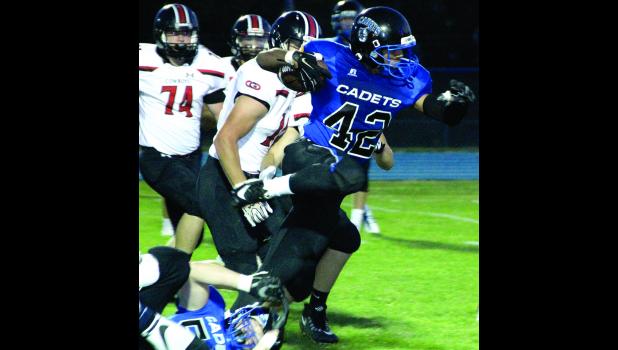 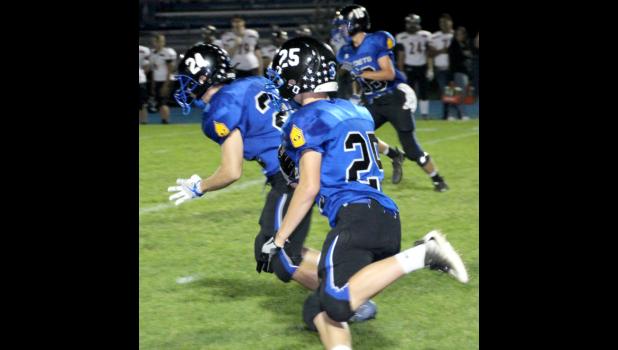 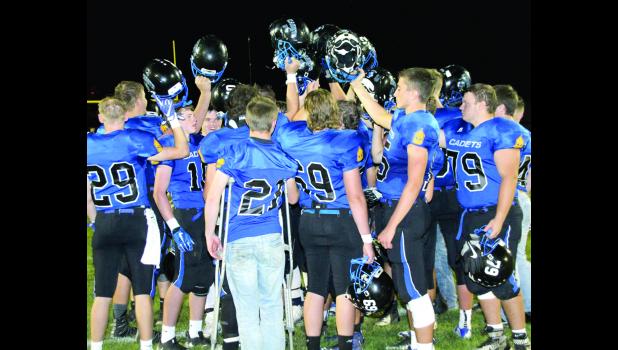 By:
Nate Troy
CRESCO -  Stout play on offense, defense and special teams spelled homecoming success for the Crestwood varsity football team Friday as the Cadets bounced the Clarion-Goldfield-Dows Cowboys, 21-6, to improve to 2-0 in District 2 (2-2 overall).
The win allowed the Cadets to remain in a three-way tie for first place in the district with New Hampton and Clear Lake, who are also 2-0 in league play. Crestwood will travel to Osage on Sept. 22 before returning home to host New Hampton on Sept. 29.
Similar to the previous game against Hampton-Dumont, the Cadets raced to an early first quarter lead. Crestwood senior Chris Guest scored two first quarter touchdowns on runs of two yards and 10 yards, and Clayton Ollendieck nailed both extra points to give the Cadets a 14-0 lead.
Clarion-GD cut Crestwood’s lead to 14-6 with a touchdown early in the second period, but the Cadets responded in the final minute before halftime. With 16 seconds left in the second, Jon Henry completed a six-yard jump pass to Zack Lane for the Cadets’ third touchdown. Ollendieck nailed the extra point to give the Cadets a 21-6 halftime lead. Neither team was able to score in the second half as the Cadets held on for the victory.
Crestwood Head Coach Chris Lentz said Friday’s win was the result of an all-around team effort.
“I think we played pretty solid on both sides of the ball,” Lentz said. “We moved the ball and executed our plays well in the first half. We ran the ball well and we caught the ball when we needed to. This was a good win all the way around.
“Defensively, Clarion had one big pass play (to set up their only touchdown), but other than that play, they didn’t do a whole lot on offense. For the most part, we had good coverage on defense. Our opponents have a hard time running on us, so they are going to test our (defensive) corners.
“We did a good job of grinding out the win. It would have been nice to get another score on the board (in the second half), but Clarion was pressing us hard by blitzing us. It was hard to pick up everyone (when they blitzed). We weren’t sustaining our blocks as long as we should have. But we’ll keep getting better every week. We will get geared up for people trying to stop us on offense.
“We had a couple offensive drives stalled because of penalties, but we will clean some things up on offense. Overall, our offense was tough to stop, and our defense played solid. We just need to take it one game at a time and get geared up for Osage (on Sept. 22).
“Our guys did some good things on defense, too. We stopped Clarion on a couple fourth down plays when their quarterback scrambled. (Senior) Dawson Rasmusson hurt his elbow early in the game, so we just kept him out in the second half.
“All-in-all, we did a lot of good things (as a team). I’m pleased with our guys because they are working hard and getting after it. We still need everyone to be ready to go because we are thin (with overall numbers). If someone comes out of the game for an injury or to get taped up, we need someone to step up and do the job,” Lentz said.
Cadet statistics
Crestwood racked up 272 yards on offense, including 151 yards rushing and 121 through the air. Clarion-GD had 189 total yards, including 129 yards passing.
Cadet quarterback Jon Henry completed six of 15 pass attempts for 121 yards, one touchdown and had one interception. Clayton Ollendieck had four receptions for 90 yards. Shane Vokaty tallied one catch for 25 yards, and Zack Lane had one catch for six yards and one score.
Chris Guest led the Cadets with 108 yards rushing and two scores on 23 attempts. Ollendieck tallied 41 yards rushing on seven carries. Braden Hayes had nine yards rushing.
On defense, Ollendieck tallied nine tackles, including seven solo stops. Logan Albert had nine tackles, including eight solo stops. Zack Lane and Wyatt Scheidel each had four stops and one sack.