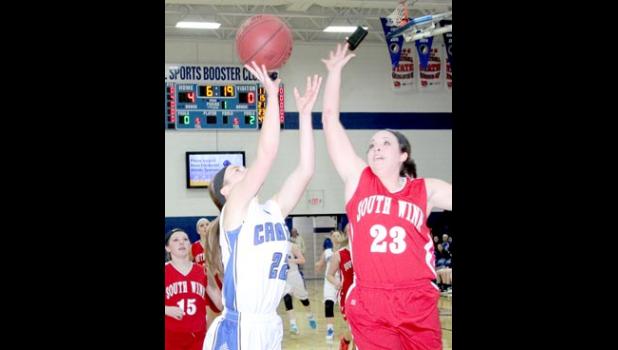 By:
Nate Troy
CRESCO - Cadet juniors Shannon Pisney and Ellie Friesen combined to score 36 points to help lead the Class 3A No. 6 Crestwood girls’ basketball team to a 60-26 thrashing of Prairie du Chien last Tuesday at home.
Taking on South Winn at home Thursday, Crestwood raced to a 10-0 lead three minutes into the contest and cruised to an impressive 66-24 win over the Warriors to improve to 3-0 overall.
Cadets 60, PDC 26
After falling behind 4-3 early in the game, the Cadets capitalized on several  turnovers to go on a 25-0 run to close the first quarter en route to an impressive 60-26 win over Prairie du Chien Blackhawks last Tuesday.
The Cadets built a 28-4 lead after one period, pushed their advantage to 44-13 at halftime and led 58-20 after three periods.
Crestwood Head Coach Doug Sickles was happy to see his team play well at both ends of the floor.
“One of the big keys for us was our full-court defensive press,” Sickles said. “Our press forced Prairie du Chien to turn the ball over (several times) and we got some easy baskets. We are going to hang our hats on our defense, and that is what helped us tonight.
“We out-worked Prairie du Chien on defense. I was also impressed with how we shared the ball on offense. We finished with 17 assists and only three turnovers, and you can’t beat that. This was a total team effort.
“I told our girls that when we don’t care who scores the points or gets the credit, we are a dangerous team. We are also a more experienced team than Prairie du Chien. We have a lot of kids who played on the varsity last year,” Sickles said.
The coach noted it was important for the Cadets to bounce back after the Blackhawks took a 4-3 lead two minutes into the game.
“We hoped we could get off to a quick start, and we played well after Prairie du Chien took that early lead. In basketball, it’s always nice to get the lead early because if you make some mistakes (later in the game), you can recover.
“Our defense starts with our guards. Ellie Friesen, Emily Friesen and Brynn Bodermann really notched up the pressure on defense and got after Prairie du Chien. When that happens, Shannon Pisney can read (the opponent’s offense) and get some steals and then we’re off to the races,” Sickles said.
Shannon Pisney led the Cadets with 19 points, including one three-pointer, had five rebounds, six assists and five steals. Ellie Friesen had 17 points, including one three-pointer, six rebounds and three assists. Brynn Bodermann had eight points, three assists and three steals.
Emily Friesen tallied six points and six rebounds. Sharon Goodman had four points, six rebounds and two blocks. Tracy Martinek, Kaylee Thomas and Lauren Reicks each scored two points.Thomas added four rebounds, and Reicks had three rebounds.
Score by quarters
PDC  4    9   7    6  - 26
CW  28  16  14   2  - 60
Cadets 66, S.W. 24
The Cadets took command of the game against South Winn early and glided to an easy 66-24 triumph over the Warriors.
Crestwood led 10-0 at the 5:26 mark of the first quarter and pushed the lead to 21-6 going into the second period.
A 19-2 run by the Cadets in the second extended the lead to 40-8 at halftime.
“Our defense triggered our offense once again,” Coach Sickles said. “I was really happy with our defense. In the first half, our half-court offense was sloppy. It’s hard to slow down and run your offense after you’ve been going 100 miles an hour.
“Emily Friesen, Ellie Friesen, Brynn Bodermann and Shannon Pisney on our defensive press triggered our offense with their effort. We’re not always in the perfect spot (on the court), but we do frustrate our opponents. Tracy Martinek played her best game of the year so far.
“Our team will play well when they all play well together. I love how our girls are sharing the ball, and they are doing an exceptional job,” Sickles said
Pisney paced the Cadets with 16 points, had eight rebounds, four assists and four steals. Ellie Friesen had 13 points, including one three-pointer, six assists and four rebounds. Tracy Martinek had 10 points and five rebounds.
Brynn Bodermann and Sharon Goodman each scored eight points. Bodermann added four rebounds, and Goodman had nine rebounds. Bodermann added two three-pointers.
Emily Friesen and Kaylee Thomas each scored four points. Friesen had four rebounds and four steals. Karley Freidhof had three points on one three-pointer. Lauren Reicks had four assists.