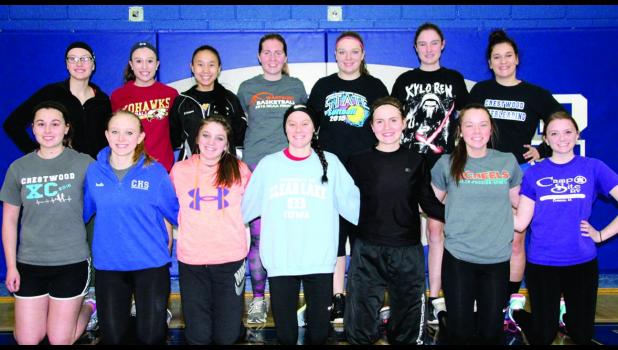 By:
Nate Troy
CRESCO - Crestwood girls’ track coach Jim Obermann is very excited about the potential for success as the Cadets begin the 2017 track season.
One of the biggest reasons for his optimism is the fact that this year’s squad will feature 50 girls from grades nine through 12. This is the largest number of girls he has coached in track in almost 30 years at Crestwood.
Among the 50 athletes, Obermann will rely on 17 returning letterwinners including: Blair Bodermann, senior; Shaunna Erickson, senior; Karley Freidhof, senior; Megan Ryan, senior; Sami Bigalk, junior; Brynn Bodermann, junior; Autumn Forcelle, junior; Ellie Friesen, junior; Emily Friesen, junior; Sam Balk, sophomore; Hope Dohlman, sophomore; Sarah Mashek, sophomore; Annie Mast, sophomore; Cassie Ollendieck, sophomore; Emily Reinhart, sophomore; Katie Saner, sophomore; Taylor Shelton, sophomore. Saner competed in the long jump and the 100 dash at the 2016 State Meet.
Seniors on the team include: Blair Bodermann, Shaunna Erickson, Karley Freidhof, Anna Matter, Megan Ryan, Haley Stevenson.
Juniors include: Danielle Ahern, Sami Bigalk, Brynn Bodermann, Autumn Forcelle, Ellie Friesen, Emily Friesen, Yutana Hughes, Kenzie Ward, Sami Weigert.
Sophomores include: Sam Balk, Abbie Bergan, Amiah DeWolf, Hope Dohlman, Trista Foster, Hallie Frohn, Destiny Hodges, Josie Johnson, Noel Lloyd, Sarah Mashek, Annie Mast, Cassie Ollendieck, Kristen Reicks, Emily Reinhart, Katie Saner, Taylor Shelton, Charlotte Stinson, Rielynn Thompson.
Freshmen include: Keelee Andera, Jenna Bolson, Katlin Born, Madison Brace, Emma Cotant, Sydney Erickson, Sharon Goodman, Libby Labosky, Angel Lebherz, Cameron Ollendick, Krista Riley, Emma Rissman, Mattie Slavin, Rachel Steffen, Kelsey Stortz, Michaela Walton, Hanna Ward.
“We are proud of the fact we have 50 girls out for the team,” Obermann said. “I’ve been at Crestwood for almost 30 years, and our enrollment here has shrunk over that time period. We are excited to have that many girls on the team considering the enrollment is shrinking, but our numbers have gone up.”
The coach is also pleased to see there will be a good mix of veterans and newcomers on the team.
“We’ll have a variety of student-athletes,” Obermann said. “Some will have a lot of talent and experience, and some will be competing on the track team for the first time. That’s good to have variety. Track is a sport where everyone can participate.”
Obermann is glad to have 17 strong returning letterwinners this season.
“It’s also nice to have Ellie and Emily Friesen joining our team,” the coach said. “They bring a great attitude and work ethic with them. I don’t really even look at them as being new (athletes) because they are a part of our school. They have both been a good addition, but we look at them as Cadets now.
“Ellie Friesen brings with her some good State Meet experience in track (at Osage in the distance events in 2015 and 2016) and cross country. She is one of the most accomplished distance runners in Iowa, and it’s a huge bonus to have her on the team. Her experience will lead the way. She has worked extremely hard to achieve that success. You can’t go from competing on the basketball court one week to competing against the top track athletes in Iowa unless you are very focused, committed to hard work and mature. She has all the intangibles which makes her a winner.
“Katie Saner also has some State experience in track (from 2016), and we’re excited to see her take another step forward. If she stays healthy, we think she can place at State this year. Hope Dohlman ran at the State Cross Country Meet last year, and she is a very hard-worker. We’ve got some girls with some good returning State experience.
“We also have a lot of returning letterwinners who learned what they could do last year. We feel good about our group. With our overall numbers, I think we’ll be more competitive across the board than we were last year. We’ll also have more depth with our distance events,” Obermann said.
The coach noted the Cadets have the potential to qualify several girls for this year’s State meet.
“We believe we have a lot of girls who can play a part in getting a team to State,” Obermann said. “Some of our girls have State experience in basketball, such as Brynn Bodermann and Emily Friesen. That will make them successful in track as well because their confidence and competitiveness will carry over to the track season. We have a lot of strong leaders,” Obermann said.
The coach is hopeful some of the younger girls on the team can achieve success this year, too.
“There are a lot of girls who will improve this season. We’ve got a lot of freshmen and sophomores out, including 17 ninth graders. We like having that depth in some events," Obermann said.