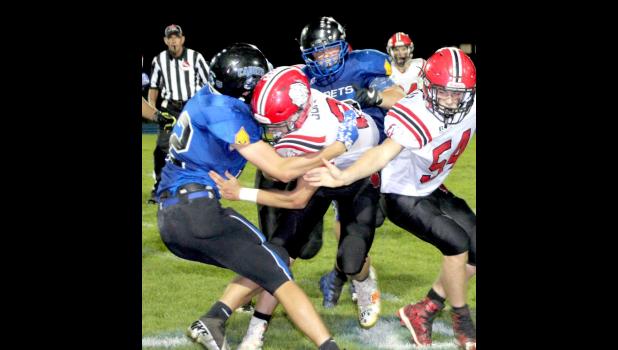 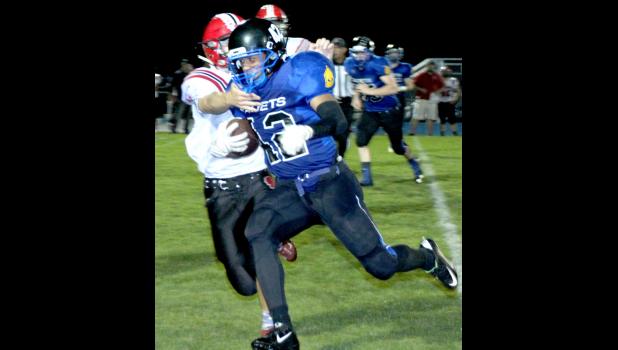 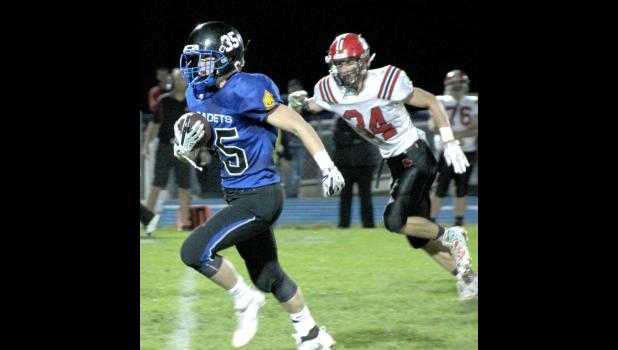 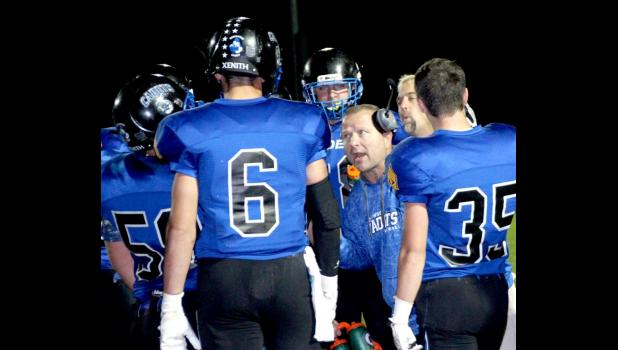 By:
Nate Troy
CRESCO -  The Crestwood varsity football team proved it is still a force to be reckoned with Friday at home during hard-hitting 13-7 win over New Hampton.
The win improved the Cadets’ overall mark to 3-3 and 3-1 in Class 2A District 2. Clear Lake holds the top spot in the district with a 4-0 mark. Crestwood, New Hampton, Osage and Garner-Hayfield-Ventura are all tied for second at 3-1 in the league.
The Cadets will play at Garner-HV on Friday, Oct. 6 before coming home to play Clear Lake on Friday, Oct. 13.
Friday’s contest against New Hampton was a defensive standoff for most of the first half. The game was scoreless until late in the second quarter. An interception by Cadet defender Logan Albert gave Crestwood the ball at the Chickasaws’ 41-yard line with 22 seconds left before halftime.
Two plays later, quarterback Jon Henry hit Harry Kitchen on a short screen pass, who weaved his way through the New Hampton defense for 41 yards to paydirt with only six seconds left. Clayton Ollendieck nailed the extra point to give the Cadets a 7-0 halftime edge.
Early in the third quarter, New Hampton capitalized on a Cadet turnover with a four-yard touchdown run by Keegan Kane at the 10:10 mark. Austin Hemann kicked the extra point to tie the game at seven.
On their next possession, the Cadets drove 62 yards for the go-ahead score.With 4:57 left in the third, Jon Henry scored on a one-yard plunge to give Crestwood a 13-7 lead. The extra point kick failed.
In the final period, Crestwood’s defense came up big. Midway through the quarter, Zach Lane recovered a New Hampton fumble to end a Chickasaw drive.
With only 1:26 left, New Hampton advanced the ball to its own 45-yard line before a sack by Cadet defender Chris Guest on fourth down gave Crestwood the ball back. A 15-yard run by Henry three plays later allowed the Cadets to run out the clock and chalk up the hard-fought win.
Crestwood Head Coach Chris Lentz said that Friday’s win was truly a group effort.
“I think we played solid football on both sides of the ball,” Lentz said. “We are playing really good, solid team defense. No one is really standing out (for us). Everyone is doing their jobs, which is what we preach to our guys all the time. Football is about doing your job as hard as you can on every play, and you will trust your teammate to make their plays.”
The coach also praised Crestwood’s offensive attack.
“Offensively, we moved the ball and got after it,” Lentz said. “We had a good week of practice (leading up to the game). We stubbed out toes against Osage (on Sept. 22) and we didn’t execute well.
“This week, going into the game, we talked to our kids and told them, ‘We can still win this thing (the district title), but we’ve got to have better practices, we’ve got to be focused, and we have to do our jobs.’ Our offensive line did a nice job. New Hampton was blitzing a lot. If we can pick up their guys blitzing and get three, four or five yards (per down), we’re happy.
“We probably could have punched in another score, but we had some penalties that hurt us. We’ve still got to get (the penalties) shored up and keep plugging away. We know we have to play good, solid football again (on Oct. 6) against Garner.
“After the game, I told our guys we need to play everyone like we played (against New Hampton). If we play solid football on offense, defense and special teams, we’ll be right there in every game,” Lentz said.
The coach was thrilled to see the Cadets’ defense force a big stop on New Hampton’s offense with under two minutes left in the game.
“It was nice we were able to get New Hampton’s quarterback (Keegan John) on the ground during their last possession,” Lentz noted. “When New Hampton spreads its offense, that’s when things can get a little bit scary because someone can get loose deep and you never know what will happen.
“We switched a few things up on defense late in the game. We played a bend-but-don’t-break with our defense. New Hampton wanted to keep hitting five-yard out patterns (so we let them).
“They only had two minutes left and one timeout left. We’ll take the law of averages there and just play solid defense,” Lentz said.
Although the Cadets are in a four-way tie for second place in the district, the coach is optimistic the team can finish the regular season strong and earn a playoff berth.
“We’ve still got three games left (in the regular season),” Lentz said. “After the loss to Osage, we told our guys, ‘We know we still have to beat New Hampton and Clear Lake to make it to the playoffs.’ If Osage wins out, good for them, but we know that we can control our own destiny by playing good, solid football. Now we’re going to focus on playing Garner.”