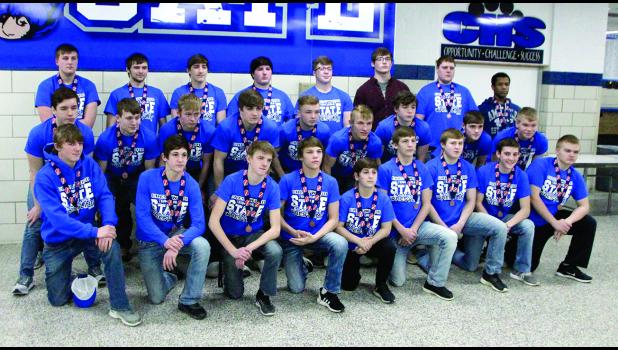 By:
Nate Troy Sports Editor
CRESCO - The 2018-19 Crestwood wrestling team gave Cadet fans plenty of reasons to give the squad a standing ovation this season.
In addition to posting a stellar 17-7 dual meet record, the Cadets finished 5-1 and second place in NEIC duals, took second at the NEIC Tourney, won the Class 2A Team Region Title, finished fourth at the State Duals, second at Sectionals, third at Districts, and qualified six individuals for State.
The Cadets brought home three State medals, including an individual title by Carter Fousek and third place medals by Kaden Anderlik and Colter Bye. Treyton  Burnikel, Wyatt Scheidel and Stone Peckham also battled hard at the State Tournament, but they did not place in the top eight to earn a medal.
During the team’s season-ending banquet on March 3, Head Coach Keith Slifka noted that 10 new wrestling records went into the books this year. Colter Bye set the individual mark for season wins (49), Kaden Anderlik was second (47) and Carter Fousek was fifth at 43. Clay Schemmel tallied 51 escapes, which was second most.
Colter Bye posted 27 pins, good for third all time. Ross Niewoehner recorded 33 reversals to move into second place. Anderlik finished with 98 pins and 166 career wins, which are both school records. Bye finished his career with a school record 131 escapes, and he was fourth in near falls this year with 42. Bye concluded his career with a strong record of 131-23.
Seniors on this year’s varsity team and their season record included: Kaden Anderlik (47-4), Hunter Fousek (25-13), Stone Peckham (34-17), Cale Jackson (14-27), Colter Bye (49-3), Cade Wenthold (4-11) and Ross Niewoehner (33-19).
Juniors included: Matthew Slifka (22-14) and Wyatt Scheidel (31-16).
Sophomores included: Hunter Bye (28-21), Clay Schemmel (29-21), Treyton Burnikel (25-17), Nathaniel Bigalk (15-21), Brendon Dixon (0-2) and Sawyer Swatek (0-1).
Freshmen included: Carter Fousek (43-4), Cole Schmauss (1-5), Garret Wenthold (2-1), Bryce Shea (16-11), Trent Pisney (1-3), Ashton Howe (1-3), Landen Schemmel (7-10), Cameron Scheidel (1-3), Brady Schlangen (0-3), Brayden Ishman (0-2), Paul Hanni (0-2), Ethan Govern (6-11) and Carter Johnson.
“We had seven seniors on the team who gave us some good leadership,” Coach Slifka noted. “We also had some younger guys on the team who had good experience coming into the season. The way our guys worked during the off-season made the difference for us this year.
“One of our biggest goals going into the season was to qualify for the State Team Duals. That had been our goal for many years. In the past, we’ve had some strong teams that didn’t qualify for State Team Duals, but we were still a top team.
“As a coach, getting to the State Team Duals was very exciting, but there were also some surprises along the way, such as the weather this winter. During the last month of the season, we only had about two practices per week (because of snow days). Trying to get the kids to manage their weight and communicating with the kids was very important,” Slifka said.
The coach noted that even though the team won only one tournament during the season (MFL-Mar-Mac), the Cadets faced many tough individuals throughout the season.
“Our competition we faced was very strong this season,” Slifka said. “That is part of what we do to prep for the end of the season. Having a tough schedule during the year benefits us at the end of the year.
“We started the season with 28 wrestlers and we finished with 28. One student started the year injured. This shows the commitment of the kids. They wanted to be part of something great, and we turned out something great this year.”
Slifka pointed out that the only conference team to beat Crestwood this year was Waverly-SR, which won the traditional State Tournament title in Class 3A.
“In the Northeast Iowa Conference, there were a ton of State qualifiers,” Slifka said. “All the good wrestlers we face during the year contributed to how well we were able to finish the season (at the State Tourney).
“Looking ahead, we will graduate seven seniors and we have only two juniors this year. We’ll be a young team next year, but we will not be without experience. Several kids coming back will have varsity experience. ]
“We’ll return three State qualifiers (Wyatt Scheidel, Trey Burnikel and Carter Fousek), including one State champion (Fousek). We can build around that experience. Younger kids will also have the chance to fill some holes in the lineup next year. You can be the greatest coach, but the students also need to do their part in the off-season.”
The coach said that the returning wrestlers will have ample opportunity to compete during the off-season by going to team camps and summer tournaments.
“I absolutely encourage kids to wrestle during the summer,” Slifka said. “Anytime you can get on the mat, that will help you get ahead of someone else. I tell our kids to think about the competition. What are they doing? We’ve got to do more within reason.
“I still encourage our students to go out for other sports (during the off-season). A well-rounded athlete tends to have less injuries because they are using different muscles.
“When you focus on one sport, there is a tendency to have more injuries, and science has shown that. At Crestwood, we’re a small school so we know we have to share athletes, and that’s important,” Slifka said.
The coach added he was thrilled to see so many Crestwood teams achieve success  so far this school year.