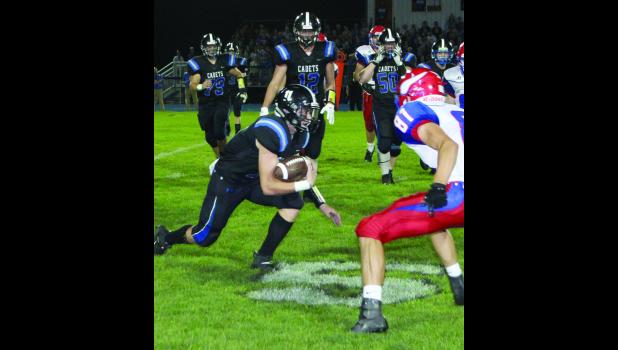 By:
Nate Troy Sports Editor
CRESCO - Decorah took advantage of a solid passing and running attack to defeat the Class 2A No. 8 Crestwood varsity football team, 37-6, during the Cadets’ homecoming game on Friday, Sept. 20.
Viking quarterback Tucker Young burned the Cadets’ defense by completing 15 of 22 pass attempts for 186 yards and two touchdowns. Decorah’s rushing attack tacked on 213 yards, including 111 yards and one score by Young.
Crestwood ground game tallied an impressive 220 yards, including 141 yards and one score by Reece Wilson. However, Cadet quarterback Garret Ollendieck was held to only three completions on 12 attempts for 26 yards.
Decorah grabbed a 7-0 lead early in the first on a 30-yard touchdown pass from Tucker Young to Logan Halverson. Gabriel Austin hit the extra point kick.
With 6:15 left in the second quarter, the Vikings pushed the lead to 14-0 on a 27-yard strike from Young to Matthew Franzen. Austin hit the extra point kick.
With only 17 seconds left in the first half, Austin nailed a 33-yard field goal to give Decorah a 17-0 halftime lead.
Midway through the third, Young scored on an eight-yard run to extend Decorah’s lead to 23-0.
At the 2:59 mark of the third, the Cadets got on the scoreboard when senior Reece Wilson broke free around left end for a 78-yard touchdown run. The two-point pass attempt was no good.
The Vikings put the game out of reach in the fourth with two more touchdowns, including a one-yard run by Seth Shindelar and a 30-yard fumble return by Halverson.
After the game, Crestwood Head Coach Skip Eckhardt noted that the Vikings simply played better than the Cadets.
“Decorah took us to the woodshed and whooped us,” Eckhardt said. “There are a lot of things we can work on. We need to go back to the drawing board. We got whipped. Decorah is the better team. They tackled and blocked better.
“We didn’t do what we needed to do (to win). I didn’t get our guys ready. It’s my fault, but I’ll do a better job of coaching them (in the next game against Iowa Falls-Alden on Sept. 27),” Eckhardt said.
On defense, Cameron Sobolik had seven solo tackles for the Cadets. Logan Albert had six solo stops. Bryer Thompson and Mason Peter each had four solo tackles.
The loss dropped Crestwood’s overall mark to 2-2 while Decorah improved to 1-3 overall. Crestwood will host Iowa Falls-Alden (3-1) on Sept. 27 at 7:30 p.m.