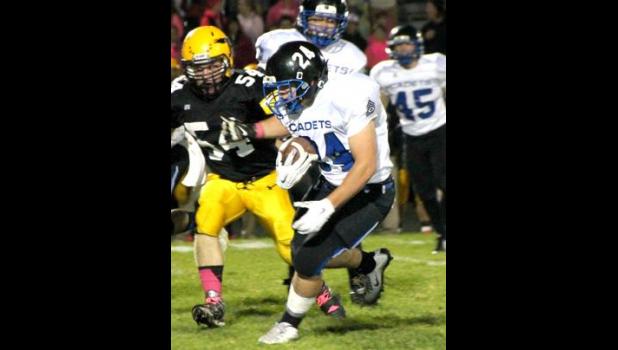 By:
Nate Troy
WAVERLY - Two fourth quarter touchdowns by Waverly-Shell Rock allowed the Go-Hawks to pull away late during a 27-6 win over the Crestwood varsity football team Friday.
The Cadets trailed the Go-Hawks 14-6 at halftime and by the same score going into the final period. Unfortunately for Crestwood, W-SR tacked on two touchdowns in the final eight minutes to earn the win and improve to 5-3 overall and 2-3 in district play. Crestwood fell to 2-6 overall and 1-4 in the district.
Crestwood Head Coach said the Cadets were able to move the ball at times on offense, but they struggled sustaining drives.
“The game was a lot closer in the first half than the score showed,” Lentz said. “Waverly had a big play (a 62-yard touchdown run by Seth Walker) on their first drive. On their second score (a 24-yard touchdown pass), we just lost Waverly’s player in traffic. Our eyes weren’t in the right spot and they got an easy touchdown.
“We did a lot of good things on offense and defense, but Waverly got a few opportune penalites. That’s football. We had Waverly in a third-and-long before they got a pass interference penalty on us, which helped them score on that drive. We moved the ball at times, but then we would have a hiccup and get behind the sticks,” Lentz said.
The coach added that Waverly’s ability to capitalize on big plays made the difference.
“The kids need to understand that every play could be a momentum-changer in the game,” Lentz said. “I was proud of our kids. We practiced hard all week, and we told them we were going to play solid for four quarters and do our best. We just came up short.
“Waverly’s last score didn’t bother me because we had to go for it on fourth down (on the previous possession) and give it a shot. We threw everything we had at Waverly including the kitchen sink. We had some opportunities. In the third quarter, we threw an interception (inside the Go-Hawks’ 30) where the ball was thrown to the backside (of the receiver), but our receiver was open on the frontside. We over-thought things a little bit, and I told the kids that was my fault.
“At times, we moved the ball well. Neil Clement did a good job running the ball at fullback. We did a lot of good things, including punching one score in (late in the second on a pass from Austin McAllister to Tristan Bohr). In the second half, if we could have punched another one in, we would have tied the game.
“We were close on a few plays. Our kids need to overcome (some obstacles). It was a game where Waverly didn’t have any turnovers, and we just had one interception. We gave a great effort. I told our guys we’re going to play Crestwood football, which is playing hard and getting after it. We’re not going to give up. Football is kind of like life because there are going to be ups and downs, and you have to overcome adversity. Our kids are great because they always work hard,” Lentz said.
WSR strikes first
After forcing the Cadets to punt on their first possession, the Go-Hawks took over at their own 34. Two plays later, Seth Walker broke free on a 62-yard touchdown run with 8:48 left. Jacob Norton kicked the extra point to give Waverly-SR a 7-0 lead.
Midway through the second quarter, the Go-Hawks drove the ball 79 yards to paydirt as the drive was kept alive by two Cadet penalties. Tanner Krueger capped the drive with a 24-yard touchdown pass to Ryan Sprain with 4:51 left. Norton’s kick pushed the lead to 14-0.
Late in the second, Crestwood got its offense on track as the Cadets marched the ball 76 yards in 11 plays. Austin McAllister completed a 13-yard touchdown pass to Tristan Bohr in the corner of the end zone with only 33.6 seconds left. The extra point kick was no good as the Cadets trailed 14-6 at halftime.
Following a W-SR punt early in the third, the Cadets advanced the ball from their own 25 to the W-SR 36 before Waverly’s Cole Havlovic intercepted a Crestwood pass inside the 30 and returned it to the W-SR 49 with 5:24 left.
Early in the fourth, the Go-Hawks concluded a 68-yard drive with a two-yard scamper by Riley Steckelberg with 7:38 left. Norton kicked the extra point to extend the lead to 21-6.
On its next possession, Crestwood failed to convert on fourth down at its own 31 to give the ball back to the Go-Hawks. Seven plays later, Krueger completed a 16-yard touchdown pass to Nick Schwemm with 2:47 left to push the lead to 27-6. The extra point kick failed.
The Cadets finished the game with 185 yards of total offense, including 133 yards rushing. W-SR finished with 339 yards, including 212 yards rushing.
Neil Clement led Crestwood’s rushing game with 55 yards on 15 attempts. Noah Guyer gained 46 yards and Dakota Rasmusson tallied 15 yards rushing.
Austin McAllister completed five of nine pass attempts for 52 yards, one touchdown and had one interception. Tristan Bohr caught three passes for 36 yards and one score.
On defense, Spencer Cuvelier tallied 8.5 tackles, including six solo stops. Dakota Rasmusson and Jared Bergan each had seven stops. Jordan Patterson had 5.5 tackles.
Crestwood (2-6) will host Vinton-Shellsburg (2-6) Friday, Oct. 23 at 7:30 p.m.