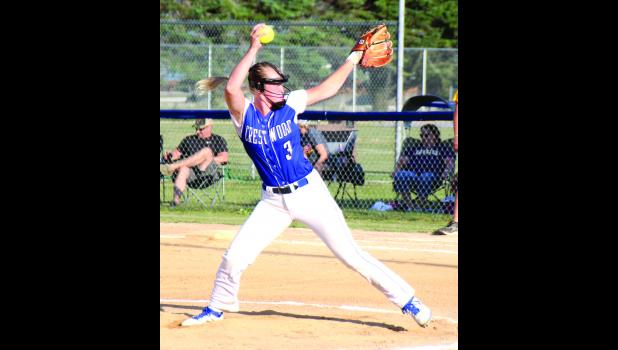 Laken Lienhard - a Crestwood Cadet for all seasons

By:
Nate Troy Sports Editor
CRESCO - It’s not uncommon for students at small high schools to play multiple sports during the school year. In fact, many coaches encourage that.
However, it is somewhat rare for any student to play at an extremely high level in four sports, including two different sports during the same season. But that’s exactly what Crestwood senior Laken Lienhard has accomplished during her impressive Cadet athletic career.
Lienhard has definitely made a name for herself at Crestwood in basketball, volleyball, wrestling and softball.
In softball, she’s earned All-State honors four times, First Team All-Conference honors five times and All-District honors five times. She posted a stellar 22-9 pitching record with an impressive 315 strikeouts during the 2019 season. During the 2020 season, Lienhard amassed a 15-1 pitching mark, tossed 99 innings, held opponents to a .099 batting average, allowed only 35 hits, five earned runs, walked nine batters, struck out 188 and posted an earned run average of 0.35. At the plate in 2020, she tallied 25 runs, 16 hits, including four home runs, had 15 runs batted in, drew 25 walks and had a batting average of .457.
In wrestling, she won an individual State title as a senior in Jan. 2020 to become the first Crestwood girl to accomplish that feat. In basketball, she garnered First Team All-Conference and All-District honors, played on Crestwood’s 2018 Class 3A State Championship Team and on the 2019 3A State Qualifier Team.
On the volleyball court, she grabbed All-Conference honors as a senior and led the team with 758 assists. In addition to her sports accolades, she was also a member of the National Honor Society.
For more information about Laken Lienhard, check out the July 29 issue of the Times Plain Dealer.