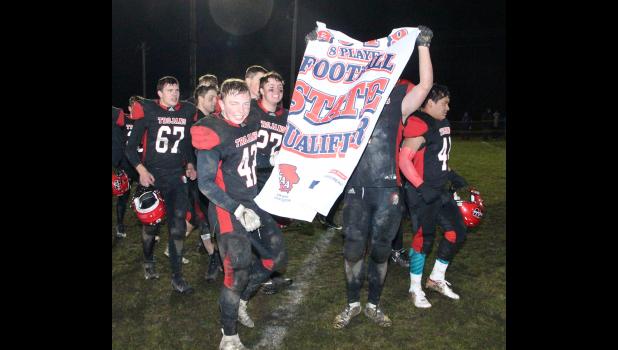 By:
Nate Troy Sports Editor
JACKSON JUNCTION - The cold and wind  did not slow down the Eight-Man No. 2 Turkey Valley football team at all on Friday, Nov. 1 at home as the Trojans rolled to a convincing 52-8 win over Rockford in the first round of the Eight-Man playoffs.
The win allows the No. 2 Trojans (10-0) to advance to the quarterfinal round against No. 11 HLV (8-2) on Friday, Nov. 8 at home. The winner of this game will advance to the semifinals at the UNI-Dome on Nov. 14 and will play at either 9 a.m. or noon. The Eight-Man Finals will be in the UNI-Dome on Nov. 21.
TV Head Coach Mark Scott noted that the Trojans performed well on both sides of the ball during their first round win over Rockford. The Trojans racked up 312 yards of total offense including 216 yards on the ground.
Trojan quarterback Ethan Leibold gained 71 yards rushing and two rushing touchdowns and completed four of eight passes for 96 yards and two scores.
“We played well in all phases of the game,” Scott said. “We scored on defense, special teams and offense. Our defense played well again, including getting a big stop on Rockford early in the game. It is hard to single out names because they all played very well. The defense did a good job of giving our offense short fields.
“Offensively, our line did a great job of blocking a much larger Rockford line. We executed well on offense and did what we needed to do. Brady Schmitt, Gage Gruenberg and Kannon Leuenberger controlled the line of scrimmage all night. (Quarterback) Ethan Leibold did a fantastic job of using up the clock in the second half.
“We also had a big kickoff return by Eli Reicks to start the second half. That return really put the nail in the coffin because it put us ahead by a score of 42-8 early in the third period. We were glad to come out of this game pretty healthy. Hopefully, we can continue to play well (against HLV on Nov. 8),” Scott said.