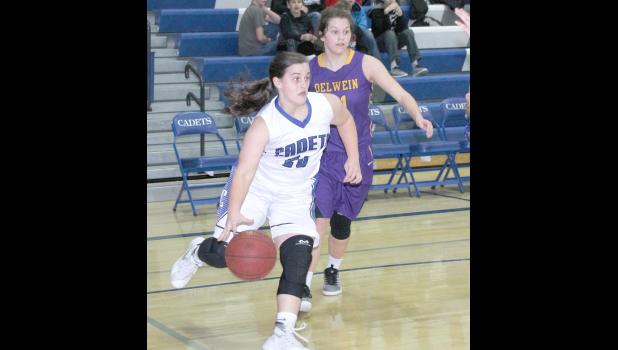 By:
Nate Troy
CRESCO - Outstanding play at both ends of the court allowed the Class 3A No. 4 Crestwood girls’ basketball team to hammer Oelwein Friday, 93-19; and crush Decorah Saturday, 58-23, to improve to 10-0 overall.
Statistics from the game against Decorah were not available at press time.
Cadets 93, Oelwein 19
Crestwood raced out to a big 24-6 lead after one period and was never threatened by Oelwein as they thrashed the Huskies, 93-19, Friday at home.
A 29-4 run by the Cadets in the second quarter gave them a commanding 53-10 halftime lead. Crestwood went on a 20-3 run in the third to push its lead to 73-13 heading into the fourth.
In addition to its stout defense, the Cadets shot the ball extremely well on offense, especially from the perimeter. Crestwood knocked down 14 three-pointers against the Huskies.
Cadet Coach Doug Sickles was pleased with his team’s play on offense and defense, but he noted the defense was the spark.
“Our defense set the tone for the game,” Sickles said. “I always tell our team that defense wins games and offense tells you how much you win by.
“This was one of those nights where every girl on our team shot the ball extremely well. We shared the ball well, which was evidenced by our 29 total assists. (Having 29 team assists) is pretty darn incredible. That tells me that the girls are playing for each other.
“We knew going into the game that we should win the game. I was happy with the way our girls executed and came together. This was a great team win for us. I was happy with every one of our girls,” Sickles said.
A total of 10 Cadets finished with at least three points. Ellie Friesen led the squad with 17 points, including two three-pointers. Brynn Bodermann tallied 15 points, including three threes. Sharon Goodman posted 14 points.
Shannon Pisney and Karley Freidhof each tallied 11 points. Friedhof finished with three three-pointers. Emily Friesen had eight points, including two threes.
Kaylee Thomas had six points on two threes. Lauren Reicks posted five points, including one three-pointer. Tracy Martinek had four points. Blair Bodermann had three points on one three-pointer.
The Cadets will host Charles City Friday, Jan. 20 and will play at North Fayette Valley, Jan. 21.
Score by quarters
Oel   6    4    3    6 - 19
CW 24  29  20  20 - 93