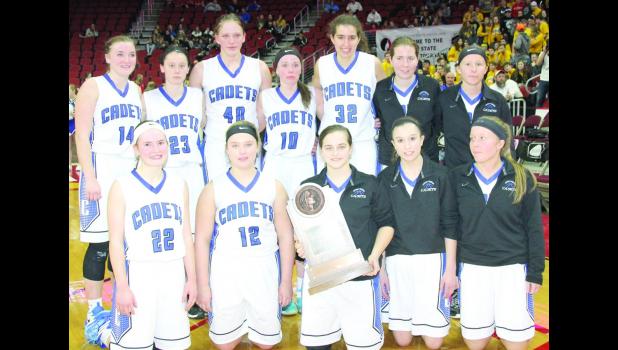 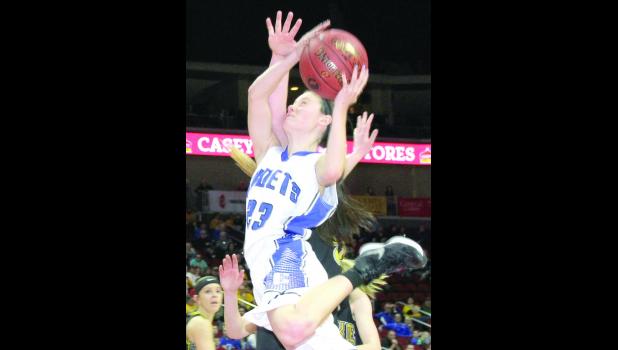 No. 5 Cherokee rallies to beat No. 4 Cadet girls at State Tourney

By:
Nate Troy
DES MOINES - The No. 5 Cherokee Braves went on a 15-1 run over the final 4:13 of the fourth quarter to defeat the No. 4 Crestwood girls’ basketball team, 70-61, last Tuesday in the first round of the Class 3A State Tournament.
The loss ended a great season for the Cadets, who posted a final overall mark of 22-2. Cherokee (21-3) advanced to play Sioux Center (25-0) in the semifinals.
Last Tuesday’s first round game saw the Cadets take control early as they jumped out to an 11-3 lead with 5:43 left in the first. After one period, Crestwood held a 26-17 advantage.
In the second quarter, the Cadets went on an 11-5 run to push their lead to 37-22 with under three minutes left. Cherokee closed the period with a 7-0 run to cut Crestwood’s lead to 37-29 at halftime.
Both teams traded buckets during the third as the Cadets took a 51-44 edge going into the fourth. Unfortunately for Crestwood, foul trouble took its toll on the Cadets in the fourth as Shannon Pisney, Ellie Friesen and Sharon Goodman all picked up their fourth fouls.
Two free throws by Crestwood’s Emily Friesen with 4:13 remaining gave the Cadets a 60-55 lead, but Cherokee took command from that point on as it nailed nine free throws over the final three minutes to  clinch the victory.
Cadet Head Coach Doug Sickles noted the Crestwood’s free throw shooting (13 for 25) and foul trouble hurt the team.
“There were a couple factors that hurt us,” Sickles said. “Our free throw shooting kind of kicked us. When you make only 13 of 25 foul shots, that changes the complexion of the game. If we could have made a few more free throws (earlier in the game), we would have had a bigger lead going into the fourth, and Cherokee would have been chasing us.
“Another thing that hurt was the fact that we don’t have much depth. When Shannon and Ellie both got four fouls, that took the wind out of our sails. We weren’t able to be as aggressive as we wanted to be on defense,” Sickles said.
“Cherokee is a dangerous team when they dribble-drive. With Shannon and Ellie having four fouls, it changed how they could guard Cherokee. One of our team goals was to make Cherokee earn their points by shooting from the outside,” Sickles said.
Cadet junior Ellie Friesen noted that foul trouble changed the game.
“When we got into foul trouble, that took away what we could do on defense, and it takes away how aggressive you can be on offense,” Friesen said. “In the second half, we were doing the same things we were doing in the first half, but our shots weren’t falling.”
Crestwood junior Shannon Pisney said it was difficult to stop Cherokee in the second half.
“We couldn’t get baskets to go in (in the second half), and it was hard for us to be aggressive with our foul trouble,” Pisney said. “It was hard for us to play the defense Coach Sickles has been showing us all season (because of the fouls).
“In the first half, we were ready to go. We knew we needed our ‘A’ game, but we couldn’t get it done in the second half. Even though we lost, I knew we were going to be a special team since day one. It’s hard not to see us accomplish our goal (of winning the State title), but this will be good motivation for us for next year,” Pisney said.
Friesen gave kudos to her teammates.
“Our team has been amazing overall,” Friesen said. “We’re going to miss our four seniors (Karley Freidhof, Blair Bodermann, Lauren Reicks and Tracy Martinek), but it’s also exciting that we have a young team and we’ll be back.”
While disappointed with the loss, Coach Sickles praised the Cadets’ effort.
“I was extremely pleased with how we played on defense in the first half,” Sickles said. “We didn’t want the score to get into the 80s, which is almost how many points Cherokee averages per game.
“We needed to control the tempo of the game, and we did for three quarters of the game. Once we got into foul trouble, Cherokee started driving to the basket and they controlled the tempo, which really hurt.
“But overall, I couldn’t ask for a better group of girls to coach. That’s why we get into coaching - to coach great kids like we have,” Sickles said.
Cadet statistics
Shannon Pisney posted a double-double with 20 points, including one three-pointer, had 11 rebounds, three assists, three steals and one block. Brynn Bodermann had 14 points, including three threes, three rebounds and two assists.
Ellie Friesen tossed in 11 points, including two threes, had six rebounds, seven assists and two steals. Tracy Martinek had five points and six rebounds. Sharon Goodman had five points and nine rebounds. Emily Friesen had four points and six rebounds. Kaylee Thomas had two points.
Score by quarters
Cherokee 17   12   15   26 - 70
Cadets     26   11   14   10 - 61