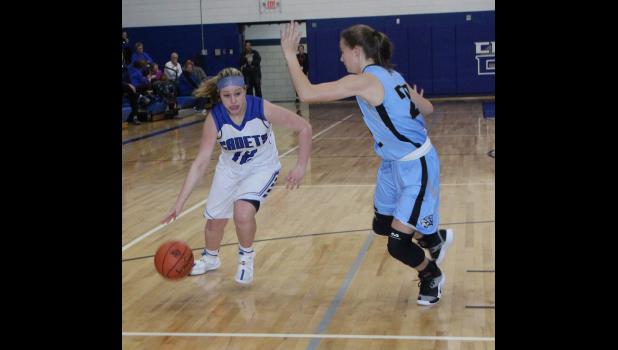 By:
Nate Troy Sports Editor
DENVER - After taking a modest two-point halftime lead, the Class 3A No. 7 Crestwood girls’ basketball team pulled away late to defeat Denver, 48-37, on Monday, Dec. 2.
Playing North Fayette Valley at home on Dec. 5, the Cadets grabbed a 20-point halftime lead and held off the Tigerhawks in the second half to win, 67-44.
Battling Dike-New Hartford on Dec. 7 at Upper Iowa, Crestwood took a 48-33 lead after three periods and withstood a late rally to tally a 64-58 win to improve to 4-1 overall.
Cadets 48, Denver 37
Crestwood took a 12-7 lead after one period, led 22-20 at halftime and went on a 16-5 run in the third period to take a 38-25 lead into the fourth.
“We played better overall in the second half than we did in the first half,” Cadet Head Coach Dale Dennler said. “In the third quarter, we did a good job of moving the ball around on offense.
“In the first half, we committed a lot of fouls. In the second half, we made Denver take more tough shots and we ran our offense better. We also didn’t force our shots and made better passes in the second half.
“We are still growing and we need to learn how to play more as a team. We also need to cut down on our turnovers but when we move the ball well, that helps us,” Dennler said.
Sharon Goodman led the Cadets with 29 points, grabbed 14 rebounds and had six blocks. Laken Lienhard had 13 points, including one three-pointer, four rebounds, four assists, three steals and two blocks.
Olivia Ollendick and Hannah Shelton each had three points. Shelton added four rebounds. Shelby Pisney tallied 10 assists and two steals. Mattie Slavin had two steals.
Score by quarters
CW  12  10  16  10 - 48
Den  07  13  05  12 - 37
Cadets 67, NFV 44
The Crestwood girls’ team took a 40-20 halftime lead and held off a second half rally by the North Fayette Valley Tigerhawks to notch a 67-44 win.
The Cadets opened the game with a 12-0 run and took a 21-11 lead after one period. Crestwood went on a 19-9 run in the second period to take a 40-20 halftime lead. NFV went on a 16-9 run in the third to cut the lead to 49-36 before Crestwood pulled away in the final few minutes of the fourth to earn the win.
Dennler was pleased to get the win but noted the Cadets still have room for improvement.
“This game was another good learning experience for us,” Dennler said. “We always tell the girls to come out strong in the third period, which we did, but in the middle of the third quarter, we allowed NFV to hit some three-pointers. We weren’t playing as well on defense as we were in the first half.
“We gave NFV some life in the third period but the girls did a good job of keeping their composure and making good decisions. We need to continue to value every possession but overall, we did a good job of moving the ball around. The girls hit some outside shots, including six three-pointers.
“Overall, this was a good win for us. NFV plays hard. We need to do a better job of boxing out and getting the ball. If we can keep hitting our shots and moving the ball around well on offense, we will make it tough on other teams,” Dennler said.
Sharon Goodman almost posted a triple-double for the Cadets as she finished with 34 points, 15 rebounds and eight blocks. Shelby Pisney tallied 13 points, including four three-pointers, had three assists, two rebounds and two steals.
Laken Lienhard recorded 10 points, including two three-pointers, had 10 assists, four rebounds and three steals. Mattie Slavin tossed in eight points, had four assists and two rebounds. Paetyn Blockhus had two points. Kryslynn Ruppert had two assists. Olivia Ollendick had three assists.
Score by quarters
CW   21  19  09  18 - 67
NFV 11  09  16  08 - 44
Cadets 64, DNH 58
A fourth quarter rally by Dike-New Hartford fell short as Crestwood held on to earn a 64-58 win.
The score was tied at 17-all after one period before Crestwood took a 30-27 halftime lead. The Cadets went on an 18-6 run in the third to take a 48-33 lead into the fourth.
“We played a good game against Dike-New Hartford,” Dennler said. “We played well in the third quarter especially. As a team, we hit eight three-pointers, which was great. D-NH made a run in the fourth quarter, but I was proud overall with the way the girls played. This was a good, tough game for us.”
Sharon Goodman led the Cadets with 24 points, had six rebounds, five blocks and two assists. Laken Lienhard tossed in 19 points, including three three-pointers, had 10 rebounds and four assists.
Kryslynn Ruppert had 11 points, including three three-pointers, and four assists. Shelby Pisney had eight points, including two three-pointers, four assists and two rebounds. Mattie Slavin and Britain Ferrie each had one point. Olivia Ollendick had five rebounds and two assists.
Score by quarters
CW    17  13  18  16 - 64
DNH 17  10  06  25 - 58