Skip to main content
Home / Sports / No. 8 Crestwood girls down PDC, fall to No. 4 Cedar Falls 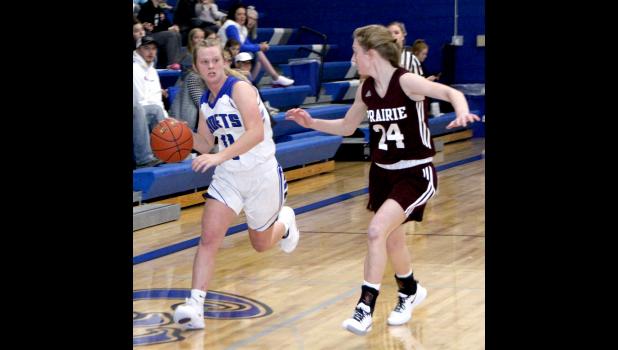 No. 8 Crestwood girls down PDC, fall to No. 4 Cedar Falls

By:
Nate Troy Sports Editor
CEDAR FALLS - Taking on Class 5A No. 4 Cedar Falls in the season opener on Nov. 26, the Class 3A No. 8 Crestwood girls’ basketball team struggled on both ends of the court as the Tigers came away with a 63-45 win.
Playing Prairie du Chien at home on Nov. 30, the Cadets grabbed an eight-point halftime lead and held off a late charge by the Blackhawks to earn a 63-55 win to improve to 1-1 overall. Crestwood will play North Fayette Valley at home on Dec. 5.
Cedar Falls 63, Cadets 45
Cedar Falls took an 18-13 lead after one period before going on a 15-4 run in the second quarter to take a 33-17 lead at halftime. The Tigers pushed their lead to 51-32 at the end of the third.
“Cedar Falls is a very quick and athletic team,” Cadet Head Coach Dale Dennler said. “We also had 21 total turnovers, which hurt us. In the second quarter, we didn’t have many opportunities to score because of the turnovers.
“On the plus side, our girls kept fighting hard throughout the game. We tried to make a couple runs on offense, but each time, Cedar Falls would bounce back and hit a three-pointer. We know we have some things to work on as a team, such as valuing the basketball more and cutting down on the turnovers,” Dennler said.
Sharon Goodman led the Cadets with 27 points, had 15 rebounds and four blocked shots. Hailey Panos had five points, including one three-pointer, and two rebounds. Laken Lienhard tallied four points, seven assists, three rebounds and three steals.
Kryslynn Ruppert had three points on one three-pointer and three assists. Mattie Slavin had two points and five rebounds. Olivia Ollendick and Paetyn Blockus each had two points.
Score by quarters
CW  13  04  15  13 - 45
CF   18  15  18  12 - 63
Cadets 63, PDC 55
The No. 8 Cadets withstood a late fourth quarter rally by the Prairie du Chien Blackhawks to earn a 63-55 win on Nov. 30 at home.
Crestwood led 17-14 after one period, 31-23 at halftime and 46-39 at the end of the third period. Prairie du Chien cut the Cadets’ lead to 59-55 with 40 seconds left before two free throws by Laken Lienhard and a two-pointer by Paetyn Blockhus in the final 30 seconds clinched the win.
“One of the biggest things that helped us was cutting down on turnovers,” Dennler said. “We had only nine turnovers tonight, which was good. We still made a few crucial turnovers, but it is still early in the season. We know we still need to make good decisions with the ball, especially late in the game.
“Overall, I was proud of the way the girls played and moved the ball around on offense. We had a size advantage with Sharon Goodman. I told the girls that we needed to use that advantage but we also need to hit outside shots.
“It would have been nice to finish the game (strong) without Prairie creeping back but the girls are still learning. Prairie has some good players, including  Lily Krahn, who caused us some problems on defense. We will continue to work hard on defense by trying to stop our opponent’s best player.
Goodman paced the Cadets on offense with 39 points, 13 rebounds, six blocks and three assists. Laken Lienhard poured in 17 points, including two three-pointers, had eight assists and three rebounds.
Olivia Ollendick had three points. Kryslynn Ruppert and Paetyn Blockhus each had two points. Shelby Pisney tallied five assists, four steals and three rebounds. Mattie Slavin had three assists.
Score by quarters
CW   17  14  15  17 - 63
PDC 14  09  16  16 - 55